A third of the way through Blogtober already!
Some more smooshy backgrounds today, well three of them to be precise, each more or less the same or as near as I could get!  I wanted to experiment with different inks on the Steampunk Angel stamp from the same Viva Décor set as the Santa airship sleigh I featured the other day.  They are silicon stamps rather than polymer and can be difficult to ink up.
So having made the backgrounds with smooshed distress inks and a background stamp from Lili of the Valley, I stamped each one with the angel and the phrase, also a sentiment from Personal Impressions. 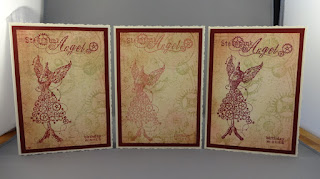 Of the three, the versafine has picked up the detail best, though it is a lot paler than I anticipated, I think perhaps it needs replacing!  The archival ink comes a close second and the distress ink is a little ...... well ...... distressed :-)  Which is to be expected and it's not a bad result for this kind of collage.  Incidentally the sentiment stamp comes out well in all three, because it is polymer, not silicon.
I am now wishing I had made them as Christmas cards rather than birthday, as I don't know how I can get rid of give away so many of such a specialised theme card!!
Posted by Wendy at 08:40