I had never done a photo scavenger hunt before, so when I saw this challenge on the ADTML blog, I thought I would have a go.  Seven photos ...... how hard could it be .....? 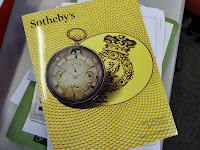 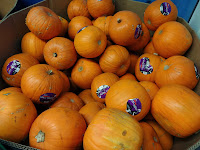 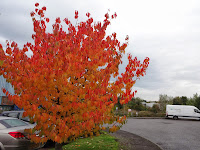 A tree on the way to work
Two days later the storm had blown away all the leaves!
Weather 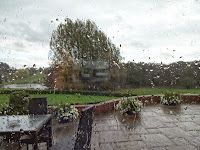 The view out of the ADTML retreat hotel window
Winter Warmer 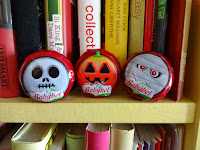 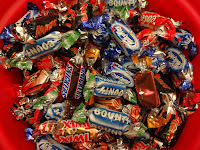 Sweeties ready for the Trick-or-Treaters
This was the prompt I struggled with, until the obvious answer hit me :-)
This was such a fun challenge, and I plan to do a layout of all seven photos :-)
Posted by Wendy at 21:07 4 comments:

Who ate all the Pies? - Craft Stamper Challenge 5 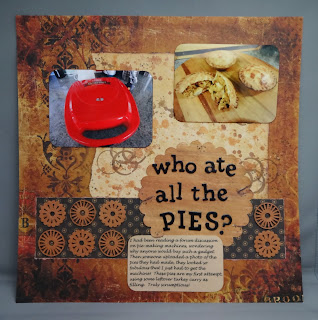 The Craft Stamper challenge requires 'splattering' to be used somewhere on the project.  I have chosen to stamp many splatters on the background cream paper.

I did this layout at the ADTML retreat, using one of their challenges as inspiration - a scrapping bingo where you had to use four things from a grid, making a 'bingo' line!  My four things were: stamping, four different papers, distressing and Thickers.

The papers are Bo Bunny 'Weekend Market', except the woodgrain which was from stash.  A selection of splatter stamps were used, from Paperartsy and Visible Image, in various shades-of-brown inks.  I used some felt circles for embellishments, not sure of the brand.  The title uses the required Thickers LOL.

A close up of the splatters: 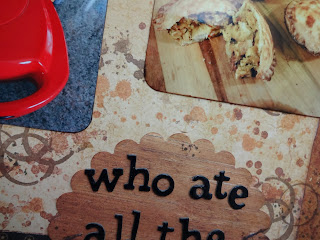 I had already scrapped these photos once, but just wasn't happy with the result ..... that first layout is now in the bin!  Never be afraid to start something again..... I am much happier with this page :-)

I have just spent the weekend at the fabulous retreat in Suffolk run by A Trip Down Memory Lane.  Got lots done and had a wonderful time :-)  I have some completed projects to share, but first I thought I had better show you the finally finished project from a class at the last retreat in April!

It was a technique class, taught by Jane Hewitt, the basic idea was to stick die-cut shapes to a frame, cover with foil tape, and paint over with black paint which was then rubbed back as desired to reveal the silver colour beneath.

This is how it looked at the end of the class: 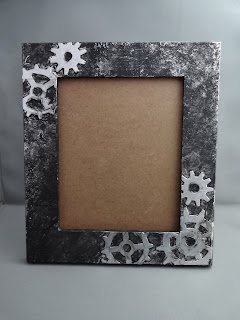 It stayed that way for a while, in fact until I went to the Stamperama show in August, where I bought this shadow box.  It has an acrylic insert which slides into the groove to form the complete frame, I have taken the photo with it pulled slightly out so you can see how it works: 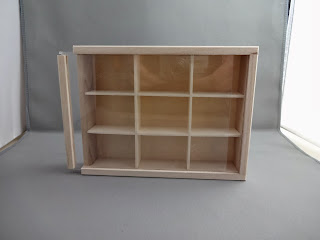 I painted the box black, while it was drying I had a little play with the frame.  I die-cut some gears in a coppery colour card, stuck them to the silver gears, then stamped/embossed in black over the frame with a script stamp.  Then I used Treasure Gold in Onyxite to highlight the gears and the frame, waited for it all to dry and sealed with Mod Podge.

Then came the interesting part .... I stuck the box to the backing board inside the frame and attached the little screw eyes to hold the charms.  This was a mistake, I should have sorted out the box before I fixed it to the board and it did cause me some problems!  Lesson learned for the next time!

The tiny travel charms are attached using jump rings and a lobster claw fastener, quite fiddly to insert.  They have an additional hidden element -  I have put a blob of Blu-tak behind each one, to stop them spinning and ensuring that they are all the right way round, all the time!

Here is the finished frame, photo'ed without the acetate front: 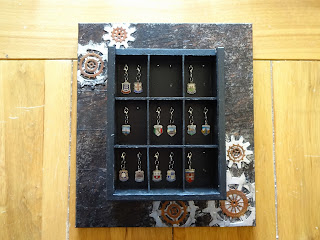 And a couple of close-ups: 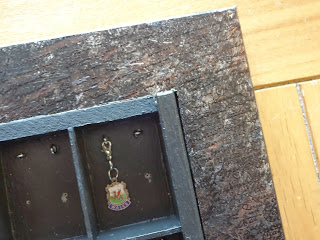 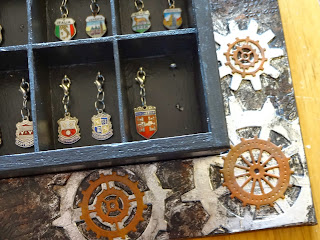 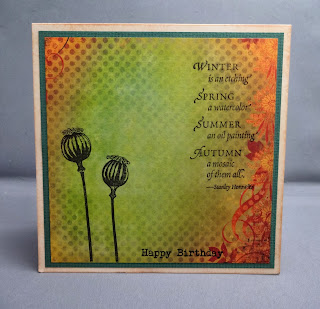 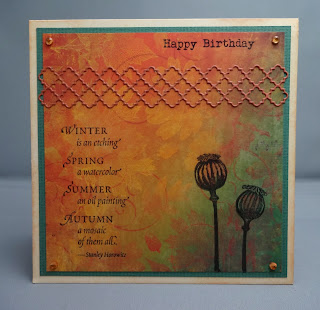 The prompt for week 40 was a picture, of multi coloured umbrellas over a street.  I decided that they were autumn colours, so went with that for these birthday cards.
The papers are from Bo Bunny, their new 'Autumn Song' range ..... yes I bought a 6" paper pad - as if I didn't have enough of those!  The colours are gorgeous, though :-)  I matted onto some Bazzill (Julep) and stamped in black Versafine over the top (thanks to Sy for that suggestion) using some gorgeous new poppy seed head stamps from Lavinia Stamps and a quote, can't remember the brand.  The sentiment is from Stamping all Day.  I used a Memory Box trellis die on the second card.
They are a bit limited as birthday cards as probably only suited to Autumn birthdays, but I am really pleased with them - I had forgotten how effective silhouettes can look :-)  A couple of other Lavinia stamps slipped into the shopping basket, so they will be coming up soon........ LOL. 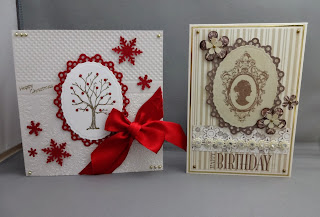 The prompt for week 37 was a sketch.  I have deviated just a little from it, but hopefully not too much.  Also I am trying a new layout for this post, we'll see how it looks!

The birthday card is made made with yet more papers from my seemingly inexhaustible 6" paper pad stash.  This one is from My Minds Eye, can't remember the title, but something French, or maybe Parisian.....
A basic background mat, with a horizontal band and an oval image.  The oval doily mat is from Dienamics and the cameo-in-frame stamp may be Stampendous, but I won't swear to it!   I have a terrible memory for brand names :-)  I punched out some flowers (EK Success) and added some pearls to the corners.  The sentiment is a HobbyArt stamp.  It still lacked something though, so I added some blingy trim along the band and a peel-off line border around the whole lot.

For the Christmas card, I ran the whole card blank through a 6" embossing folder (Embossalicious) and added the oval doily mat, the punched snowflakes (Martha Stewart & Woodware) and the ribbon, which had originally come from a box of chocolates ....... I could never tie a bow like that :-)  The tree was stamped and embossed in gold and the little red berries are actually the waste from the doily die-cut - quite fiddly to stick down, but they do look nice.

Out of the two, I prefer the birthday card :-)  And I don't like this layout - will be back to normal on the next post! 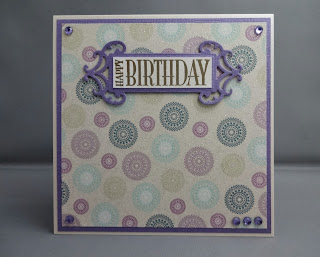 The prompt for week 38 is ...... the G-word ...... glitter!  Aargh!!!!  I don't do glitter.......
I was going to give this prompt a miss, but I am on a mission to use up 6" paper pads at the moment and one of them (from First Edition) had some glittered papers in.  So I have made this very simple card, just a piece of the g-paper, matted up and sentiment added, with jewels in the corner.

However ...... this has led to a fab discovery, which is that this particular sentiment stamp (Hobby Art) fits perfectly into this Nestie tag- it could have been made for it!  So something good has come of this prompt after all, I will definitely be using this combination again :-)