I have (perhaps foolishly) decided that I am going to participate in Blogtoberfest 2014.  A blog post every single day of October.  This is a bit of an undertaking for someone who has just recently started posting again after a two and a half month gap .....

It's all Karen's fault.  She has persuaded myself and Sy that it will be fun :-)

Email ThisBlogThis!Share to TwitterShare to FacebookShare to Pinterest
Labels: blogtoberfest 2014

I haven't blogged since mid July ..... where did August and September go??  A severe lack of mojo combined with (or perhaps because of?) pressure at work meant that I made hardly anything during that time.  Some half completed pages at crops, some half finished cards.... but no real inclination to finish anything.  I have managed to cross stitch for 10 - 15 minutes every day, sitting in my car before work, which has resulted in a couple of finished pieces, more on those tomorrow :-)

The steampunk piece below is a class kit which I started at the Merly Impressions retreat, back in June.  The original class item was this frame, covered with flowers ..... so not really my thing LOL.  I brought it back home with the paper (Kaisercraft, not sure which range) attached to the separate pieces and that's how it stayed for, ahem, a couple of months.  Finally I bit the bullet and put the pieces together, painted the mini frame, found a nice quote from this site, added the keys, the crystals and the other metal bits.  It still needed a little more, so I made an interrupted border from silver nailheads.

Here it is in its final position: 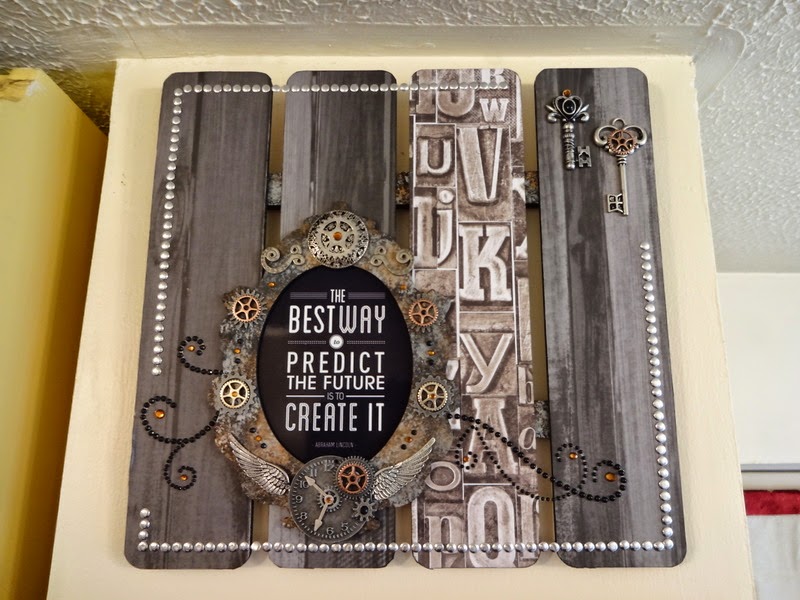 I am very pleased with it :-)  also I have made a great discovery - Cosmic Shimmer glue will stick metal to metal, now that is something which will prove very useful in future!
Posted by Wendy at 17:18 2 comments: