Sue is running Beat the Christmas Rush over UK Scrappers this year.  Five cards a month and by the end of October, you'll have fifty!  You can miss a month and jump back in the next month, it's up to you.
Here are my five for January: 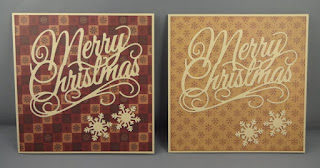 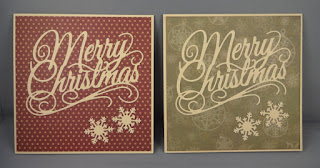 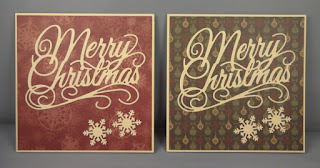 You may notice there are actually six! - I made these at a crop and I happened to have six of this particular colour of card blank with me, seemed a shame not to use them all :-)
The papers are from a Sara Davis 6" paper pad and the large sentiment die is from Memory Box.  The snowflakes are made with a Martha Stewart punch.  Initially I just had the sentiment, but it just seemed to need a little something more, hence the snowflakes :-)
Posted by Wendy at 17:20 No comments:

Although made at the same time, this didn't fit the challenge of the last post, so I thought I would blog separately :-) 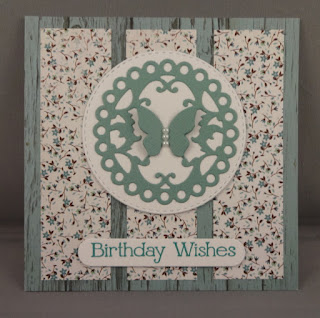 I covered the card blank with the wood grain paper in the Kaisercraft 6.5" Sea breeze collection pad, then made triple panels from the tiny flower paper.  The die is unbranded and I cut it twice to get a second butterfly, which is attached leaving the wings free.  Then it was matted onto a plain stitched circle in white and the sentiment was stamped/embossed and die-cut out.
Posted by Wendy at 20:31 No comments:

Kool Kitty Nat is running a card challenge this year, with a monthly theme and a goal to use old and new stash.  Which goes very well with my own Buy it - Try it and Out of the Drawer :-)  January is 'Fancy Words', where the sentiment or other text is the focus. 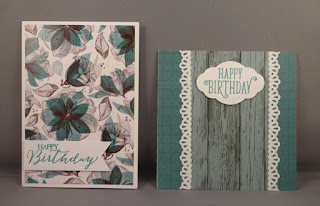 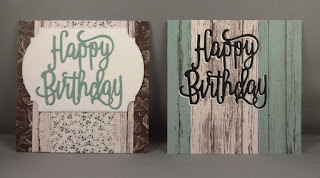 I used a 6.5 paper pad from Kaisercraft, Sea Breeze I think, as the 'old' element and the large HB die from SU is the 'new'.  The other sentiments are also SU and are stamped/embossed in metallic Teal from American Crafts.
Posted by Wendy at 20:54 No comments:

Email ThisBlogThis!Share to TwitterShare to FacebookShare to Pinterest
Labels: 2018 card challenge, Buy it -Try it, die cutting, embossing, out of the drawer, punches, stamping

Now the pressies have been given, I can share :-)

The brief was 'flowers and blue', 'unicorns' and 'cats'.  I found some dies in the Hobbycraft sale, 'Intricut' which I had not seen before, but they had a unicorn and a cat (and a couple of others...!) so it was worth a try :-) The packaging states that they may need a shim - there is no 'may' about it, they do!  Three passes through the machine and finally I had my cat and unicorn.  The background papers are from Craft Creations and the white box frames are from The Range.
A word here about Stick It die cutting adhesive sheets - I loved this product when it came out three years ago, but it seems to have some real quality issues now - I used it because the dies are so intricate, but they wouldn't stick to the background paper. I had to run over the back with Herma repo adhesive, the Stick It did at least stabilise the die-cuts so that the Herma didn't distort them, but I am very disappointed, this was exactly what it is supposed to be used for, but it just didn't work.  I'm sure it was stickier when it was first released.
The flowers are done with an SU stamp and matching punch.  Each one has three separate layers, so that was 27 flowers stamped, punched and coloured!!  Not counting the test ones LOL.  The centres are pale green Card Candi.  I had a devil of a job getting the grid right, but it came out OK in the end!  The frame is a Ribba from Ikea, it's a 9" box frame, my intended 8" frame was just too small to get the 3 x 3 grid.
Posted by Wendy at 20:12 No comments: