Oh, what a month I have had - after doing so well for Blogtober, I had a massive (and I mean massive) computer failure. It took DH two weeks to fix it completely, we kept getting it back only to have more fatal crashes.  In the end, we have had to buy a new hard drive and install Windows 10 as W7 just refused to stay alive, the crash had corrupted essential files.
In the process I realised that, whilst I always back up holiday photos, I hadn't been doing the everyday stuff, ie the stuff I scrapbook!  All my scrapbooking photos were separate.  More time taken to rig up the dead hard drive in what I am told is called an 'enclosure' and pull off photos, music, paid-for downloads etc ....... this has taken nearly a week.  Then to install Picasa and other software again, it has been a nightmare.  All photos are now backed up, more time taken ....
Finally, I can get back to blogging!  I have managed to make a few things whilst I have been computer-less LOL.  First up is BtCR for November. 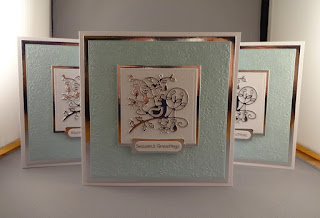 I used a freebie magazine die from Cardmaking and Papercraft, which they annoying call a die cutting stencil.  It's not a stencil, it's a mask.  Grr.
I cut it in silver mirri, matted onto a Diamond Bling square, embossed the Sparkle Bling background square with snowflakes and made a mirri mat for that also.  The sentiment is done using SU punches and a peel-off - Krafty Karen had done some cards incorporating the punched shape into the frame and I really liked the idea :-)
I need to do a count up now, to see if I have enough cards yet.  BtCR has really helped, so I will be doing the same next year!
Posted by Wendy at 15:52 No comments: