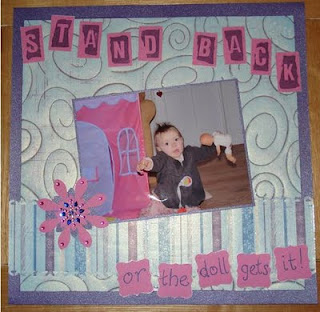 Yes I know it's now Tuesday - but this is the first time I haven't been too exhausted to do anything but collapse in a mindless heap after work :-)

Sy arrived on the Saturday, we had a couple of hours crafting before lunch. Sy crocheted a scarf, while I made some bead handbag charms and a couple of what Sy calls "identi-charms" for the spines of scrapbooks. Well, all my travel albums are the same colour, I have to have some way of telling them apart LOL. I was also printing off Venice photos, so I could continue with that album at the crop on Sunday. The stock of photo paper was running low, so we we decided that after lunch we would just have to go to Staples to get another pack. By sheer coincidence (!) the Staples at Crawley is on the same business park as Hobbycraft. Well it would be rude not to go when we were so close to it.....

I spent an all-time low of £18 in Hobbycraft, just bits and pieces really. We had to go back into Staples as the dozy girl on the till had charged me for four RUBs when I had only bought three. The supervisor dealt with it very efficiently though, apologised for the mistake and I got my refund. We got back and I printed off the rest of the photos, while Sy chatted to DS2 and his friends.

Sunday morning was the usual frantic rush to pack for the crop. I still managed to forget my cutting mat, corner rounders and my pens! Next month I will be organised beforehand, I will, I will...........

At the crop I mainly did Venice pages, they are very simple, just patterned paper, the photos and some stamp details. But I also did the LO shown above, for Little Girl's second album, it uses the mystery page kit I was given at the Debden weekend, but couldn't make up 'cos I didn't have suitable photos with me. I am quite pleased with the way it turned out, though I did want to round the corners of the photo and mat. Ah well.......... I used my new apron lace punch again, such a nice effect :-) The title font is See D's Ransom Note, bought 3 years ago and used for the first time *hangs head in shame*.

Sy and I went out for a curry after the crop, then she had to drive back to London. Another craft weekend done!
Posted by Wendy at 20:42 4 comments: