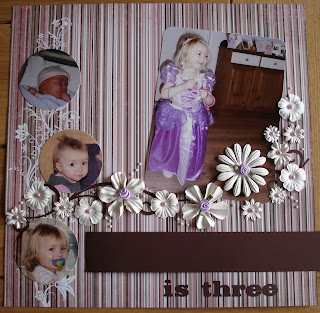 Here is the first page from the fourth Little Girl album (the strip of cardstock obscures her name!). The format is the same as usual for the first page, with a large pic taken on the actual 3rd birthday and the previous years' pics as small circles.

The paper is from Kaisercraft and I die cut a long swirly flourish, then added flowers. The centres of the large flowers are ribbon rosebuds and the smaller blooms have pearls. Title was done on the robo. 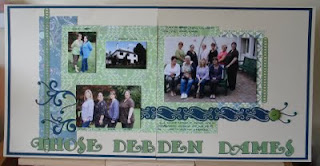 Here we all are at our 2nd annual retreat at Debden House in Essex. Two days of scrapbooking fun :-)

The papers are from the Two Scoops collection by Basic Grey - I loved this collection so much I bought up all the sheets I could find when it was discontinued ...... and I still have a lot of them ...... need to use them up! The title is cut on the robo, in two colours, I put the blue on the page first, didn't like it, so put the green on top but offset just a little - gives a nice shadow effect which hasn't come out as well in the photo as it has in reality. The two punched strips are done using EK Success punches - the blue with the scroll chain and the green with the circle chain. The scroll chain had some interesting waste pieces which I added to each end, together with some pearls. But I wasn't quite happy with it, so when the flourish dies arrived yesterday I added a couple of those as well - had to move the waste pieces at the left side - thank goodness for repositionable herma LOL. Thank you to Scrappy Sarah for the button from her fabulous button jar :-)

The whole thing still seemed to be 'floating' so I added a plain frame in the blue cardstock to enclose it all and am really pleased with the effect!

A card of two halves 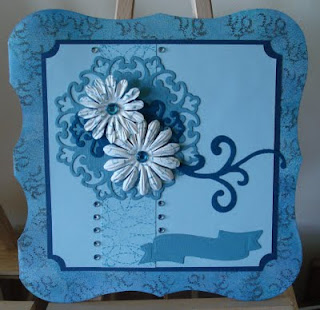 I started this card a couple or three months ago. The pack of card blanks I had bought because I liked the shape and size (about 8"square!) turned out to be made from a really glossy cardstock, which I wasn't expecting.

So I decided they would probably take distress ink quite well and I did the edges of the blank in various blues and greens, stamped with a speckly stamp in a dark blue and then a little bubbly swirl in brown. Then I put the inverted corner mat in the middle........ and then I was stuck! I tried a die cut frame but it just looked wrong, so I ripped that off and the card sat in a basket for several weeks.

Last weekend was the May craft weekend, and the plan was for me and Sy to use up a lot of scraps by turning them into die cuts. Suddenly I had inspiration for the card! I put a pale turquoise mat over the dark base, stamped a strip of the same paper and attached that, then die cut two motifs from the Parisian nestie set. I overstamped two flowers (shudder!) and put those on, then cut a nestie ribbon banner, which I have left blank for an appropriate sentiment to be added when used. A few gems for the centre of the flowers and the sides of the strip and it was ....done.... or was it?

I looked at it when I got home from the crop on Sunday and decided it needed something else. Sy had brough some Sizzix flourish dies with her and I had cut out some in a few colours. Luckily one of those colours was the same as the one used on the card so I added the flourish , tucking it in just underneath the flowers. 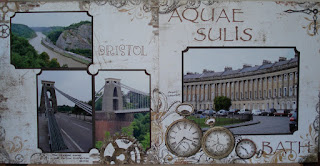 This is not so much a double LO as two complementary single ones! DH had taken our Romanian visitors to Bristol for the Bansky exhibition and on the way back to Sussex they visited Bath.

The papers are from the new Bo Bunny "Timepiece" collection, which I absolutely love. I didn't really need to put anything other than titles and a brief decription, as the paper does all the work! Sy came up with the idea of cutting around the watches and slotting the photo in underneath them, and I decided to do the same with the gear on the Bristol side. A bit fiddly, but I love the result. The titles are stamped, Bristol with Hampton Art Doodlebug and Bath with See D's Ancient.

Email ThisBlogThis!Share to TwitterShare to FacebookShare to Pinterest
Labels: stamping 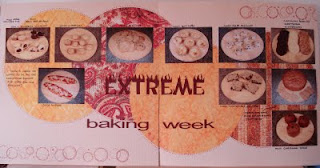 This is the last LO from the marathon Bank Holiday session! I had taken a week off work to do all the baking for Christmas 2009 and these are the results :-)

It's a nice and simple LO, with a grid of photos on top of overlapping circles of papers (Daisy D's). The border stamp is from Hero Arts, the title is cut with the robo and I have doodled dots around all the circles.

Doing the albums for Little Girl and Big Sister means I am very behind on my own stuff, but I can now see the light at the end of the tunnel as far as my 2009 album is concerned - 5 pages to finish off and 7 double LOs to do! Ok, technically that is nearly twenty pages - somehow it sounds much better the other way ......

Saturday is National Scrapbooking Day - I feel another marathon session coming on :-) 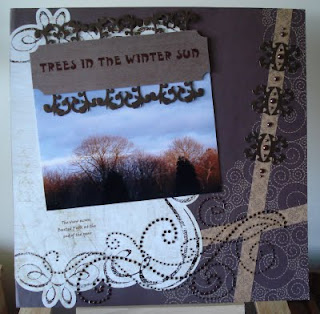 Another "finished off" LO. Now to be honest, I am not sure about this one - I had a picture in my head and it hasn't exactly come out as I thought it would........

The title is printed onto safmat and stuck to metallic bazzill, the border behind it is made from nesties fancy tags three, which was an idea I saw on the Amazing Paper Grace blog - she does some really nice things with nesties. The waste from the tags was too good to just throw away, so I used it on the vertical strip, with pearls in between. Some swirly studs and bit of safmat journalling to complete it......... but I am not sure that I like it really. 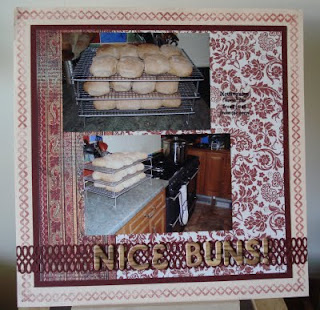 In 2009 there was a cybercrop over on UK Scrappers, with a pre-CC challenge to do a LO about the heart of the home. So I took pictures of my kitchen, the oven and some bread..... then never entered the challenge!

So here, finally, I have managed to make a page :-) The papers are Daisy D's and Crate Paper I think, the border punch is a Martha Stewart, border stamp is from Paper Trunk and the lettering is Cosmo Cricket ..... probably.......

I am indebted to Scrappy Sarah for the brilliant title :-) 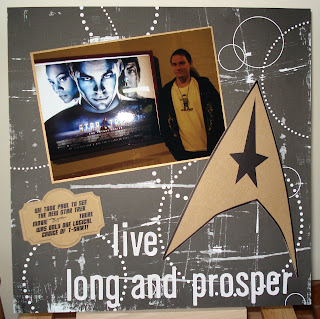 This is another LO which has been hanging around, awaiting title and journalling. DS2 is a real Trekkie and we went to the new movie on the first showing! The photo is taken outside the cinema.

I had already printed the comm badge design onto safmat and stuck it onto bazzil gold cardstock, so I knew that was how I wanted to do the journalling, but all the wording I came up with just didn't look right - and I was also stuck as to the title. So it sat in the 2009 album for ages ...... Then suddenly the wording popped into my head, I printed it onto safmat and used a Nestie labels 21 die to cut the journalling box.