I made eight of these, but could really only fit five into the photo!  The stamp is from Inkylicious, stamped and heat embossed onto some pearlescent card, then punched into a circle and popped onto a die card mat in the same card (die from Tonic).  I then made a card blank from the same card, with two rounded corners.  They were initially assembled as side fold cards with the rounded corners at the open side, but halfway through I decided that maybe they would look better as tent folds with the corners at the base, and I do now prefer them that way. 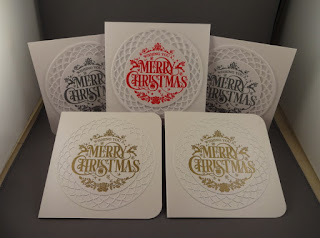 The gold is done on pearlescent ivory and the others on white.
Posted by Wendy at 10:33 No comments: