I used my new SU daisy stamp and punch set to start off this card, together with a Kaisercraft texture stamp and a sentiment banner.  But it was just a bit too CAS for me, I felt it needed something else.
Fast forward a couple of weeks and I had bought some new Kaisercraft dies at the Merly Impressions retreat.  My trial cut of this border die happened to be a nice green from my scraps tray ...... 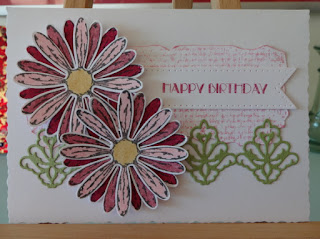 ...... and I realised it was the perfect addition to this card!
The daisy was stamped and punched three times, coloured with three SU pink pens, and layered up, with the centre coloured yellow.  I used the same pens to 'ink' up the texture stamp and sentiment, then cut out the stamped image, and die-cut a banner.
I like the layout of this card, think I will try it with an embossed panel in place of the texture stamp next time.

Out of the Drawer: Snowflake Christmas cards

This Stampendous stamp set and matching dies came out a couple of years ago, I saw it and thought well that's OK, but I won't bother with it.  Fast forward a few months and I see a card on Pinterest and decide that actually I would rather like the sets after all!  But you know how fast everything is released and then disappears nowadays...... I couldn't find it anywhere.  In the end I got the stamps from a UK company and the dies from the US, via Amazon.
So what happened next ....?  Yes you guessed it, they went into the drawer and have never been christened, even though I went to such lengths to get them!!
Tine to put that right:-) 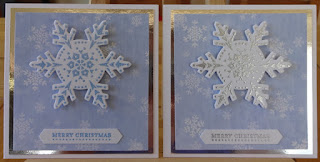 There are two small and one large snowflakes in the set and I used the smaller ones, in two colourways.  However I found that one of them was more difficult to die-cut as the die obscured most of the stamping and it was very difficult to position accurately.  The gold snowflake on the right was my third attempt, I then switched to the other one which is much easier to cut!
For the blue cards, I stamped/embossed the snowflakes in silver and blue, plus a sentiment (Stampin' Up).  The paper is from Craft Creations, matted onto silver mirri.
The gold snowflakes and sentiment are also heat embossed and the paper is from Teresa Collins, matted onto a nice dull gold.
I made five gold and six blue - it would have been six gold but I messed up the stamping of the sixth snowflake and I was a bit fed up with them all by that point LOL.  I also discovered that my 4" card blanks were actually not square, so I had to trim all my carefully cut mats to fit!  I have since cut down the entire pack so that they are all square, otherwise I can't use any square dies without them looking wrong! Thank you, Card Crafts UK ......
I ma very pleased with how they have turned out, that's eleven more for the box :-)

Email ThisBlogThis!Share to TwitterShare to FacebookShare to Pinterest
Labels: Christmas cards, die cutting, embossing, out of the drawer, punches

We have finally got my PC back together and working again (fingers crossed, it's for real this time!!)  I have had to get all my photos etc off the old hard drive, re-install all the photo processing software, reset all my internet stuff.... nightmare.
I have been making a few cards in the meantime, though :-)  This is Krafty Karen's birthday card. 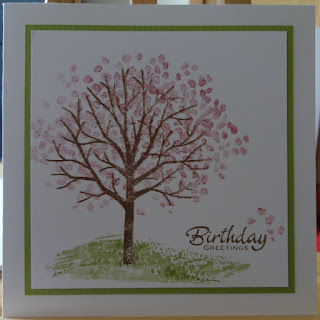 I have used the SU Sheltering tree stamp set and a sentiment from Stamping all Day.  The grass is two impressions from the same stamp, without re-inking, over a masked-off tree trunk.
Posted by Wendy at 14:27 No comments: