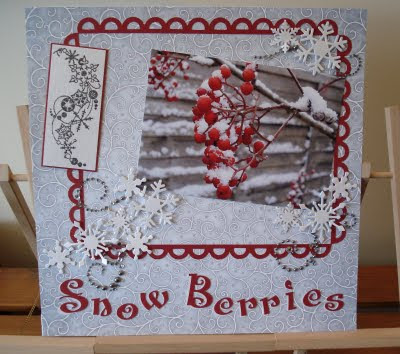 I started this LO at the crop last Sunday, but yesterday decided I didn't like what I had done so ripped off everything except the title (I was happy with that LOL) and started again ....... Luckily the repo Herma was still repo and the gems hadn't stuck very well so the paper was only slightly damaged and easily covered up! And no, I didn't think to take a "first attempt" photo .... sorry!

The paper is from Craft Creations, one of the Christmas range I bought last year. I had stamped directly onto the page on the first attempt, but it hadn't come out very well so I stamped and embossed (Marcasite embossing powder) onto some Bazzill Bling in Diamond and matted it onto Pomegranate, then covered up the mis-stamp! I hadn't actually expected the image to come out very well on the bazzill, usually the texture hinders stamping, but the result on the bling seems to be good .... will have to try some more of that.

The scallop lace borders are robo-cut (UKScrappers download) as is the title, using a font called Santa's Big Secret! I punched out some of the snowflakes (MS punch) and die-cut the rest (Marianne die). Then I took the big pearl and crystal swirl which had been just plonked down on the first attempt and cut it into pieces to go with the snowflakes.

I am really glad I re-did this one - it was a difficult decision to make, I had been really tempted to leave it how it was, no matter how bad ...... Really pleased with the result! 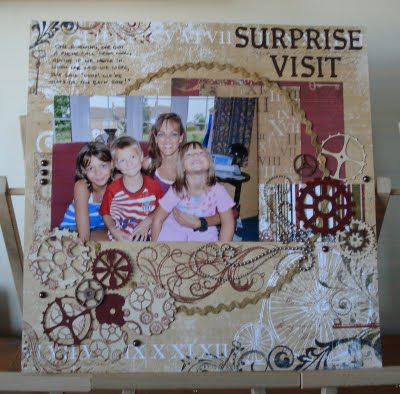 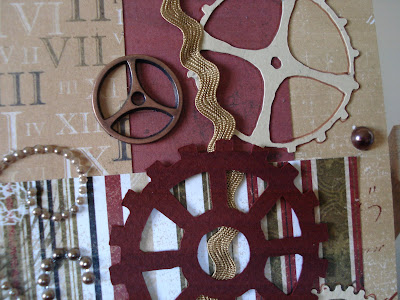 This is my entry for the Scrapology August Challenge.

It was definitely challenging! I found the sketch hard to interpret, also my photo was 7x5 not 6x4 and I had to fit journalling in too! However as I worked through it, it came together quite well and I am really happy with it.

I used Bo Bunny Timepiece papers. The circle is done with some ric-rac I found in my ribbon box - I stuck it down first, to see how it would look, then had to keep lifting and repositioning it to put the patterned papers underneath! The cogs and gears are cut on the robo, using a UKScrappers download - I can't now remember whose, if anyone recognises it, could you let me know so I can give proper credit .... thank you. I also added some TH metal gears. For a bit of fun, I overstamped some of the cogs with a cogs stamp! The swirl is done with two different stamps (Dimension Fourth and Waltzing Mouse) and overlaid with a pearl flourish. The title is also robo-cut and I handwrote the journalling, then added a few pearls.

It's a lot simpler to type than it was to do! 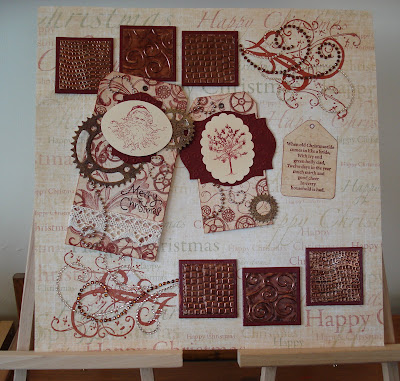 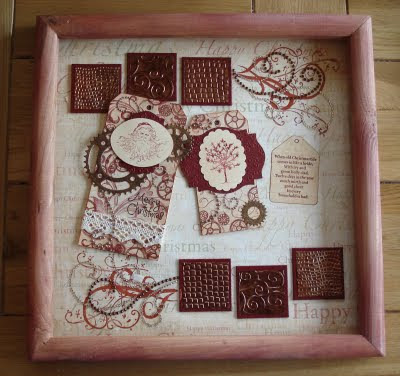 This is the finished picture using the tags from the previous post. The background had been done for a while, but I had been putting off assembling it ...... in case it all went horribly wrong ...... LOL. But last weekend was craft weekend and Sy was here - she always makes me be brave so I got down to putting it all together!

The background is a Craft Creations paper, like the one on the tags but with Christmas words printed all over it. The squares are painted chipboard with an embossed and alcohol-inked metal square on top. I stamped and embossed two different flourishes and laid crystal swirls over the top. The frame was glimmer misted in reds/browns/bronze. And that's how it all stayed for weeks until last Saturday ......

The original plan was to position the two tags and then stamp the verse at the right hand side. After much tweaking of position (a smidge to the left, a twitch upwards, you know how it is!) I mounted the large tag on 2mm foam tape and the smaller on 1mm. Then I stamped and ...... DISASTER! The verse was just lost in the whole picture, you couldn't see it at all :-(

Lightbulb moment - I remembered I have a large tag punch, so I punched a piece of white paper to check it would cover the stamping, then stamped on and punched out the swirly paper, distress inked it as I had the others and inked the edges. Then I realised that I wanted it to lay flat, which it wouldn't do if I added an eyelet like the other tags. Sy suggested I use a pen to colour the edge of the eyelet hole - worked a treat!

I am dead chuffed with this - it might just stay out until Christmas now, I don't want to put it away! Oh and I asked DH what he thought and he said oh yes, it's very nice and then in a puzzled sort of way he said "But what's it for?" ........... 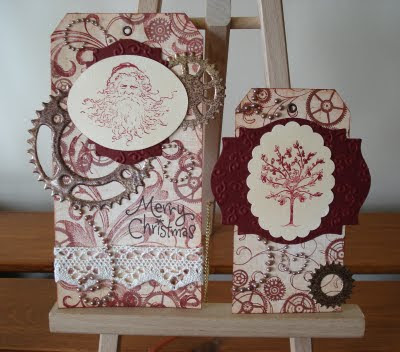 I have been mulling over this idea for a long time - these two tags will form part of a bigger Christmas picture eventually!

I covered both tags with some Craft Creations Christmas paper, a mottled creamy colour with a darker cream swirl. Then I blended distress inks around the edges in Antique Linen and Tea Dye. The large tag was stamped with a Hero Arts flourish in Aged Mahogany and some Paperartsy cogs and gears in Brilliance Pearlescent Chocolate. The smaller tag has a swirly background (think that is a Hero Arts one too!) and the cogs, using the same inks. I didn't want to cover the background when it was done!

The gears are die-cut with the Nestie sprocket set from gold mirri, which I smooshed over with a Versamark embossing pad and sprinkled embossing powder in copper, gold and black, then heated. Wasn't sure how it would turn out, but it seems to have worked pretty well. Although I am still finding areas of my desk which have a crunchy stray embossing powder layer!

The stamped images are matted onto Nestie label 18, run through an embossing folder after cutting. Father Christmas is from Stamps Away and the Partridge in a pear tree was bought in a sale last year - can't remember the brand now. It has unfortunately lost all 'cling' - I had to hold it in my fingers to ink it up and stamp it, it just wouldn't stick to the acrylic block! Took several attempts to get a good impression LOL. I then punched out the images with plain and scalloped oval punches. Ovals seem to work very well with this Nestie die, I will be using the combination again for cards, I think!

Then I added the crochet lace, the pearls and a Stampendous 'Merry Christmas' sentiment. I haven't really done tags before, but I love how these ones have turned out, so I might be doing some more! 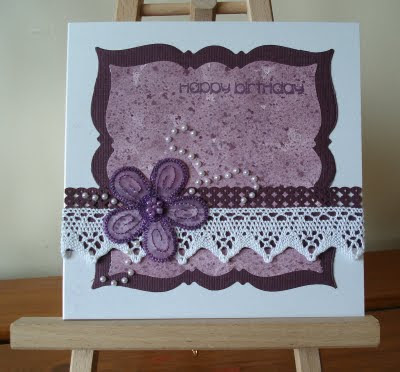 I bought these Go Kreate frilly square dies some time ago and this is the first time I have used them. I have to say, they didn't quite cut completely through, I had to take scissors to a couple of places. Next time, I will try an extra shim in the Big shot sandwich. The only other ones I have used from this range are the large plain and scalloped ovals and I had no problems with them.

The paper is from an old scrap pad I found while sorting stash and is matted onto some Bazzill Plum (sadly a discontinued colour). The punched strip is done with an EK Success border punch and I added some crochet lace to the unpunched edge. A flower - also found whilst stash-sorting! - and some pearls almost complete the card. Then I did the thing which terrifies me the most - stamping the sentiment directly on the card. I did have my tag dies ready in case I messed up the stamping and needed to do a cover up, but luckily it came out OK! 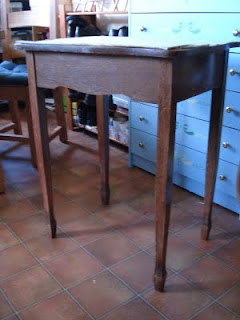 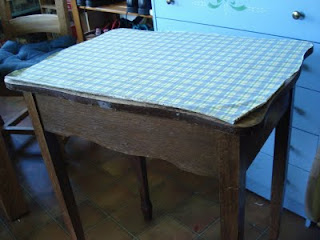 We went to see our friends in their new house last Friday and came back with this table, which had been left by the previous occupants. I haven't painted up a piece of furniture for ages, so am really looking forward to doing this one ....... except ....... that ....... I don't have room for it, so will be giving it back to our friends once it is done! Nothing wrong with that, but when I asked what sort of look she would like, the reply was "a cream, distressed, crackled sort of thing". I don't really do distressed, so it will be an, erm, interesting venture out of my comfort zone!
First thing is, to get that awful sticky back plastic off the top.........