A colour prompt for week 16 of the 52 cards challenge.  A card featuring the colour gold :-) 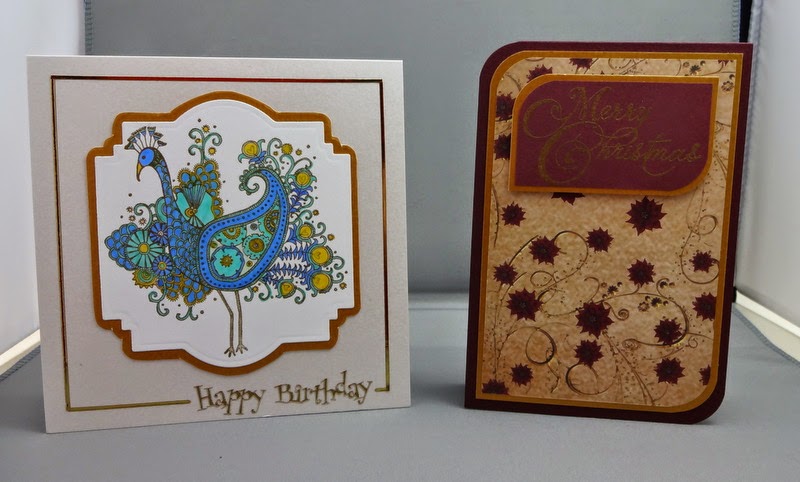 For the birthday card, I used an Impression Obsession stamp - bought at the Make It show a couple of years ago and I had even taken a photo of the finished card on the stand to remember the colours.... then he went into a drawer :-)  A few weeks ago, I had stamped/embossed him in gold and coloured in various shades of blue/gold/aqua, but had never got around to making him up into a card.  As soon as I saw the 'gold' prompt, I knew he would be perfect!  I die-cut the image, but it needed the largest die in the Nestie set, so for the gold mat I had to draw around the outside edge of the die and hand cut.  I made an interrupted frame for the sentiment with gold peel off lines.  This card has already been shipped off to its recipient - I reminded DH of his mother's birthday, he looked in my card box and picked out this one.  Let's hope she likes it!

The gold on the Christmas card doesn't show up very well in the photo, unfortunately, it all looks much richer IRL.  The paper (Making Cards mag freebie) has a lot of gold swirlies between the poinsettias, there are gold mats for the paper and sentiment tag and the sentiment itself is stamped/embossed in gold.  I really like the rounded opposite corners look, so used it again here on both the card blank and the tag.
Posted by Wendy at 11:58 No comments:

The prompt for week 15 is to feature animals on the card. 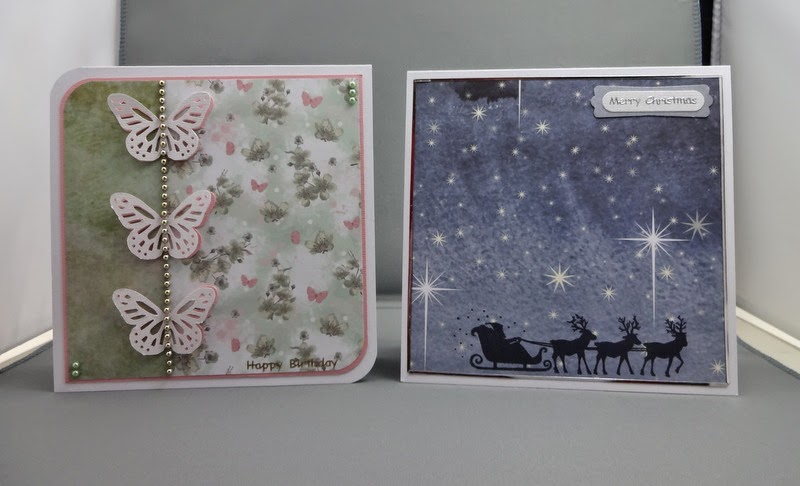 The birthday card uses Making Cards magazine freebie papers.  The butterflies are punched (Martha Stewart) and I added a line of small gold nailheads to link them together.  I have seen this style of card blank quite a lot lately and thought I would give it a go - I rounded two opposite corners to give the shape.  Some green pearls and a peel off sentiment to finish.

The Christmas card has more freebie paper from MC and I simply over-stamped Father Christmas and reindeer (Lavinia stamps), then added the punched sentiment tag (Stampin Up).

I have at times messed around with texture paste, sprays and alcohol inks, but I don't think I have ever intentionally started a full on mixed media piece before.  I had to go and buy some gesso especially :-)  This was inspired by two projects found whilst blog surfing.
This one from Misteejay:
http://misteejay.blogspot.co.uk/2014/03/sunshine-good-company.html

And this one from Gabrielle Pollacco, which I found via a video link on you tube:
http://gabriellepollacco.blogspot.ca/2014/01/video-tutorial-steampunk-journal-cover.html
the video is well worth watching, not too bad at a shade over 24 minutes, though I did mute the music after a while :-)

So I started with a piece of greyboard cut to fit a 5 x 7 frame, applied gesso all over it, left to dry.  Then I added texture paste through stencils and adhered various die-cuts and some letter stickers, and gesso'ed all over again.  At which point it looked like this: 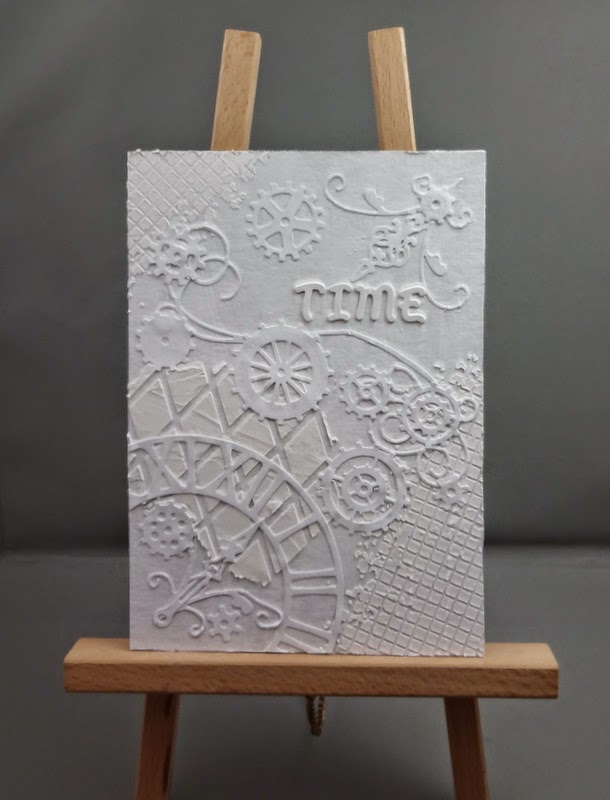 ﻿
Now for colour..... I used spray mists and alcohol inks and water from a mister to make the colours run nicely.  The piece was dried with a heat gun between each colour.  Then I applied Treasure Gold in Classic Gold over the raised die-cuts and some TG in Aquamarine in a few areas. 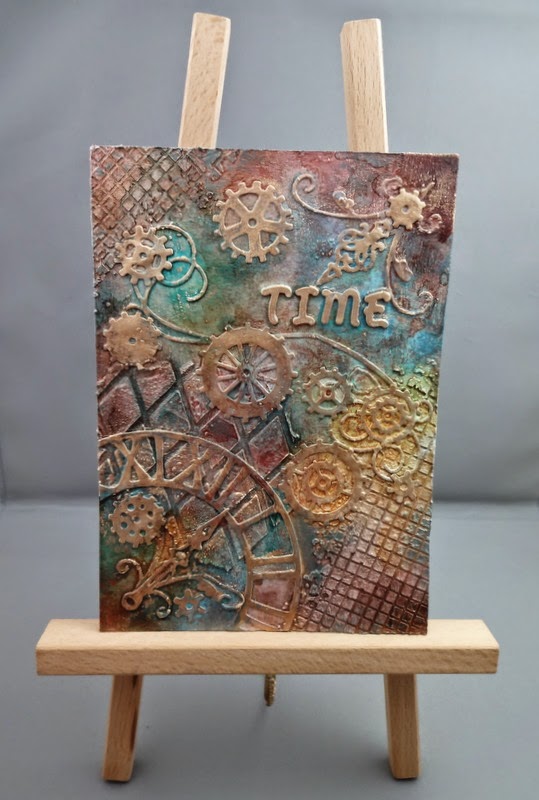 The frame was a plain wooden one, I painted it with Paperartsy fresco paint in chocolate pudding, then added some copper spray mist over the top, but this made it compete with the artwork too much, so I knocked it down a bit with some Paperartsy matte glaze.  The final touch was to add some metal corners, from 7 Gypsies I think, coloured with alcohol ink.  I also added a few crystals to the gears in the piece. 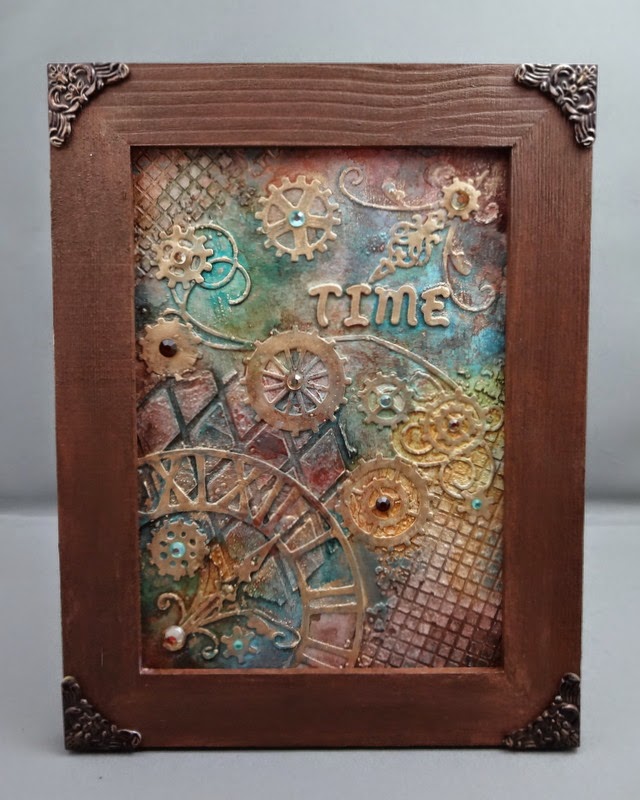 And there it was done!  I am rather pleased with it and will definitely do some others.  After all, I have a whole tub of gesso to use up ...... :-)

I am finally catching up with the challenge after a few very stressful weeks!  The prompt for week 13 was this sketch.

There was an additional prompt to make the most of the frame.... which I didn't do in the end, as I just made a simple square topper.  I did buy a frame die, though, so may revisit this sketch in the future :-) 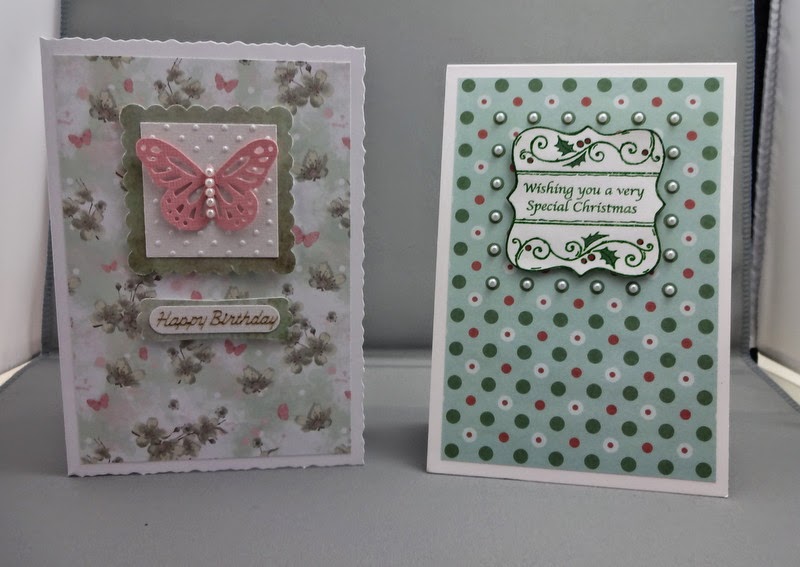 The birthday card is made with freebie magazine papers (Making Cards) in a soft green/pink/white combination.  It took a while to find the right pink for the punched butterfly (Martha Stewart), I chose Bazzill Blossom.  The butterfly looks a little off centre in the photo, it is not .... honest .... one wing is lifted higher than the other!  The scalloped square (Woodware) and sentiment tag (Stampin Up) are the solid green from the same set of papers.  I embossed the white square  on which the butterfly is sitting with a Swiss Dots folder - maybe Cuttlebug?

MC freebie papers again for the Christmas card.  I stamped/embossed the Woodware stamp in a dark green, then coloured in the red and green of the holly, after cutting out the image I inked the edges with dark green.  I followed the dots on the paper to make a frame of white pearls.

BtCR for March - not nearly as last minute as usual, I must be getting more organised .....?!  Sticking to the theme.... busy paper, simple sentiment :-) 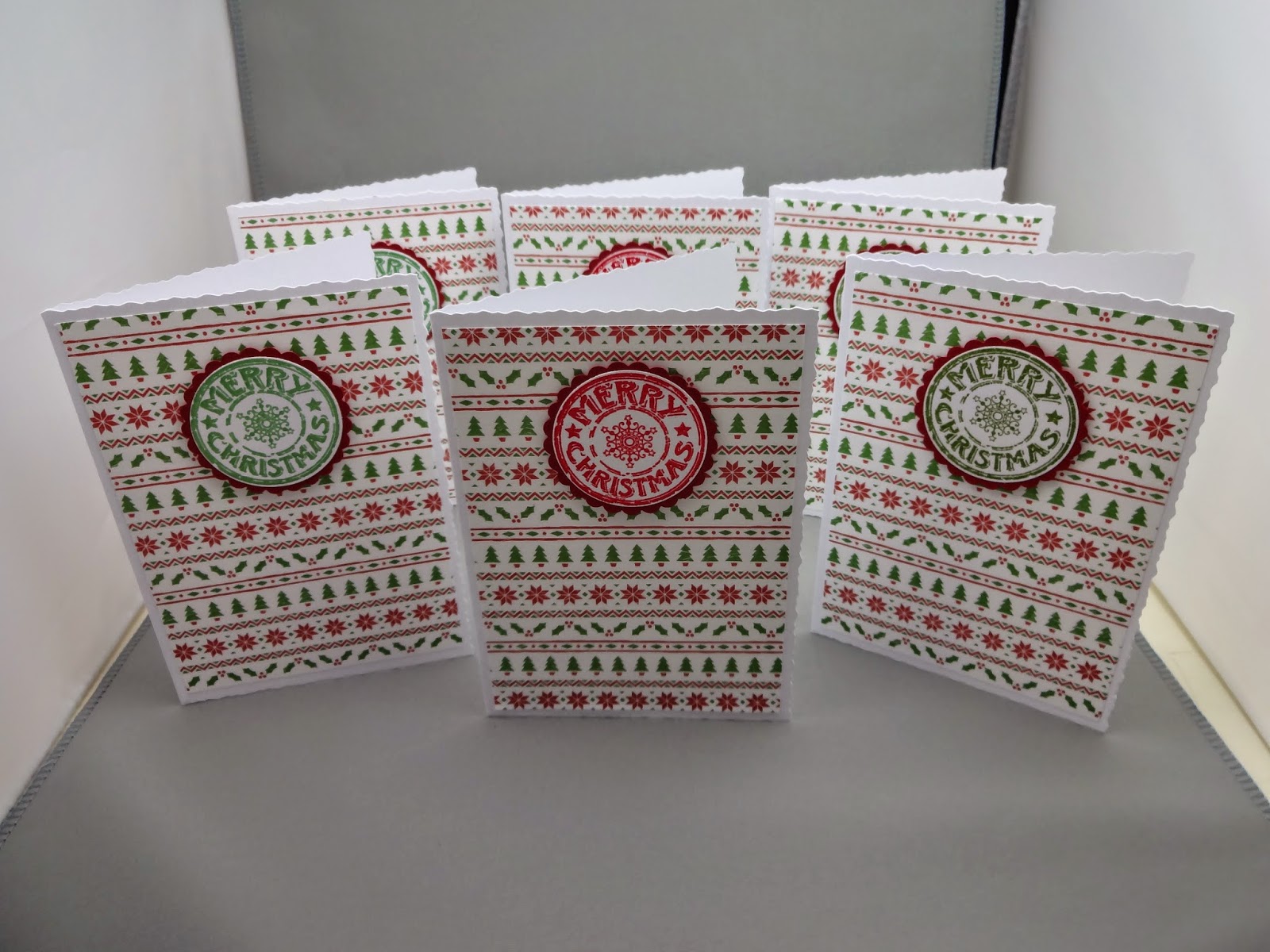 I cut a 12" sheet of Christmas paper (Craft Creations) into six, to fit A6 deckle edge card blanks.  Then I punched 1.75" scalloped circles (Stampin Up) to mat under the stamped sentiment (Technique Tuesday).  Just for variety, the sentiment is stamped and embossed in red and two different shades of green - Apple Red fine from Wow!, Metallic Green from American Crafts and Olive from Stampendous.
Posted by Wendy at 07:41 4 comments:

Some time ago, when I had my huge craft room clear out, I collected all my wooden items (some half done, the rest still blank) together on a shelf .... then filled a couple of boxes too....:-)  This icon is one of the half done items, I had painted both sides burgundy, then sprayed with a reddish purple Glimmer Mist.  So far, so good.  But then I attempted to over-stamp the two inside surfaces and it was a disaster - I put it to one side and waited for inspiration to strike.
A while later ...... months later in fact ...... I picked up the Failed Icon again.  Here it is with the inside surfaces over-painted in cream, which hides the disastrous stamping nicely (took two coats, mind!). 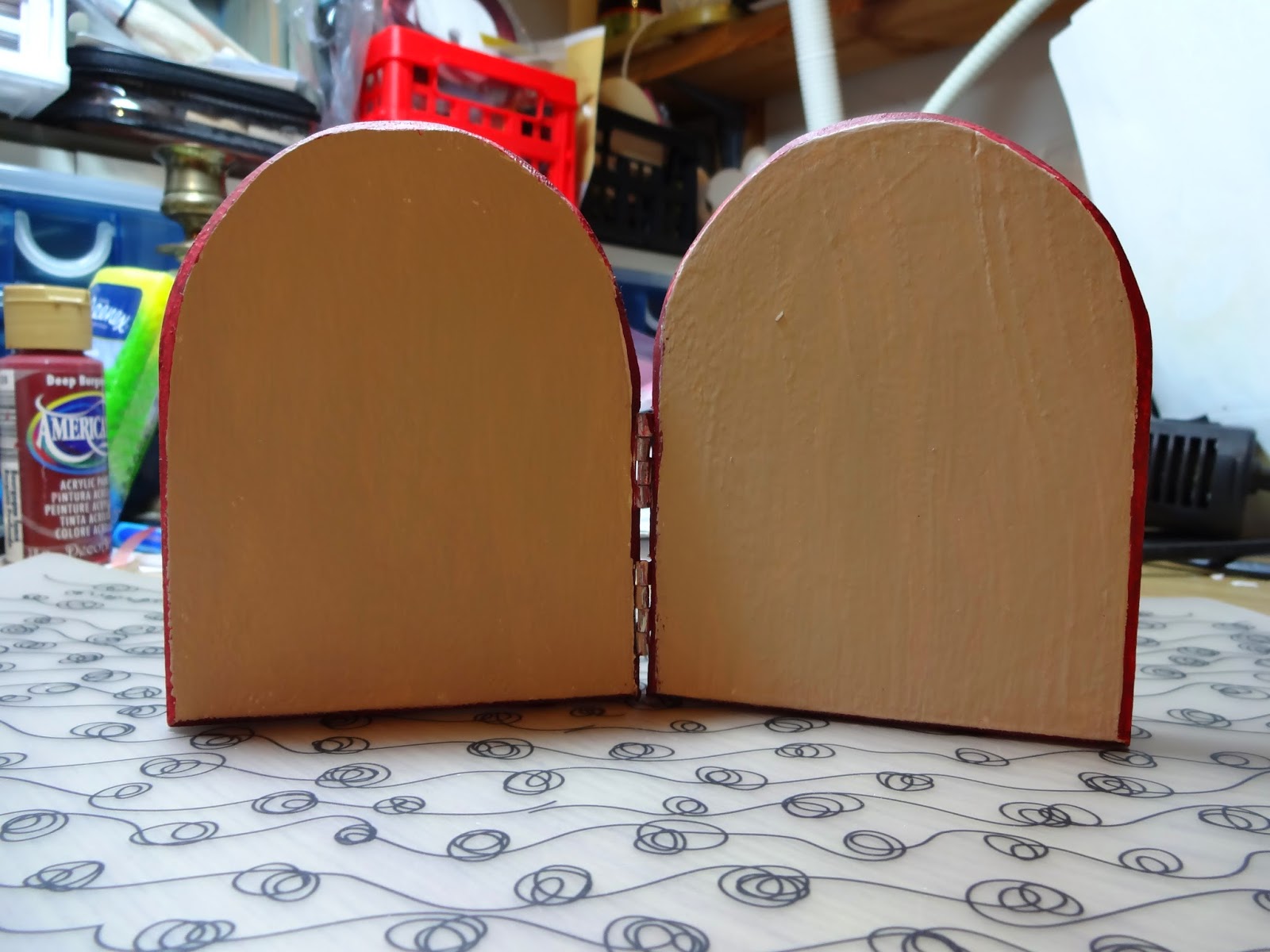 Then I stamped a crackle design all over, which didn't properly take in some places due to the uneven wood surface, but looks OK for the vintage look I was after. 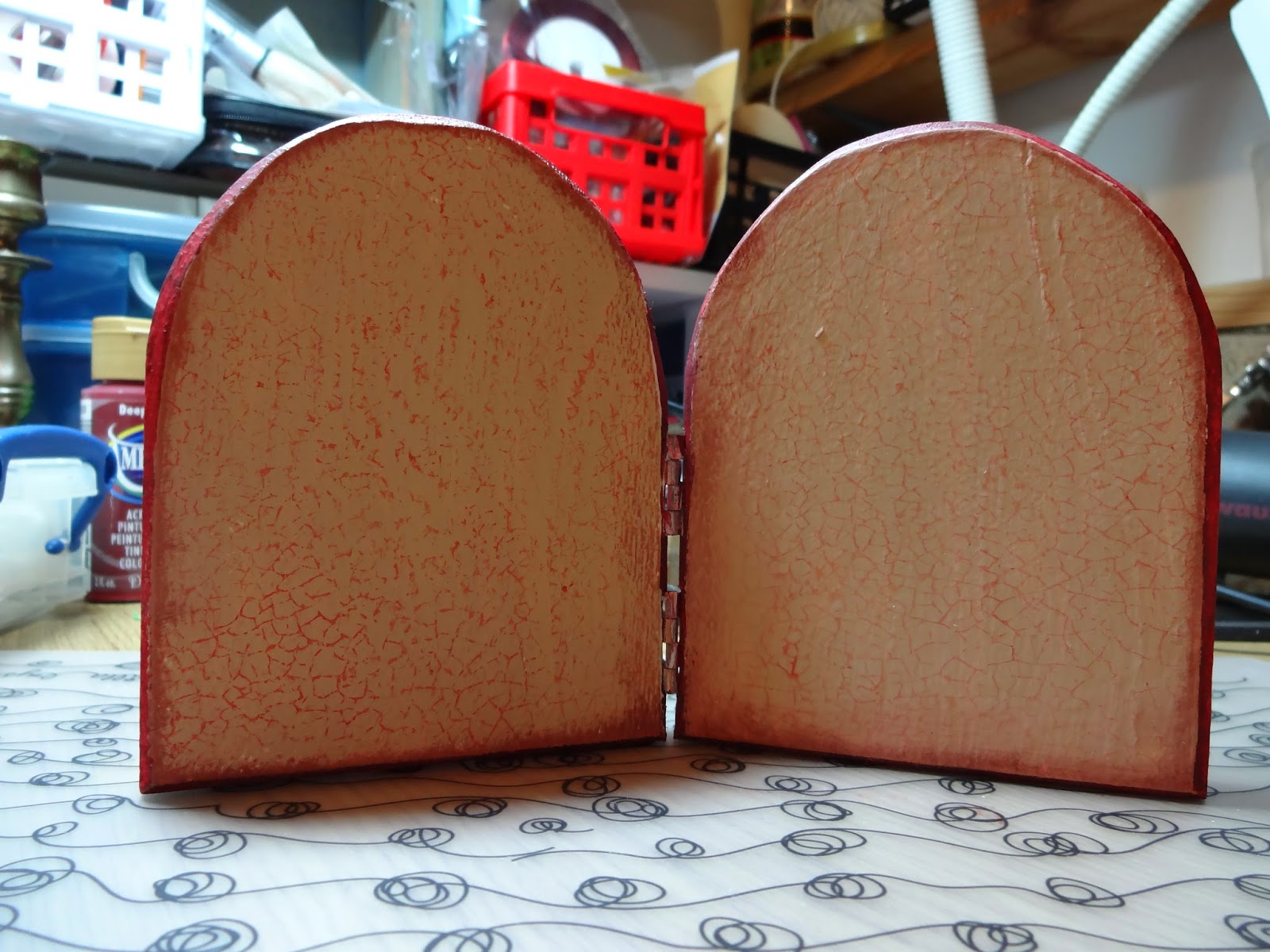 I stamped a selection of gears and swirls around the edges of each side, though I should have thought a bit more carefully about the inks I was using...... 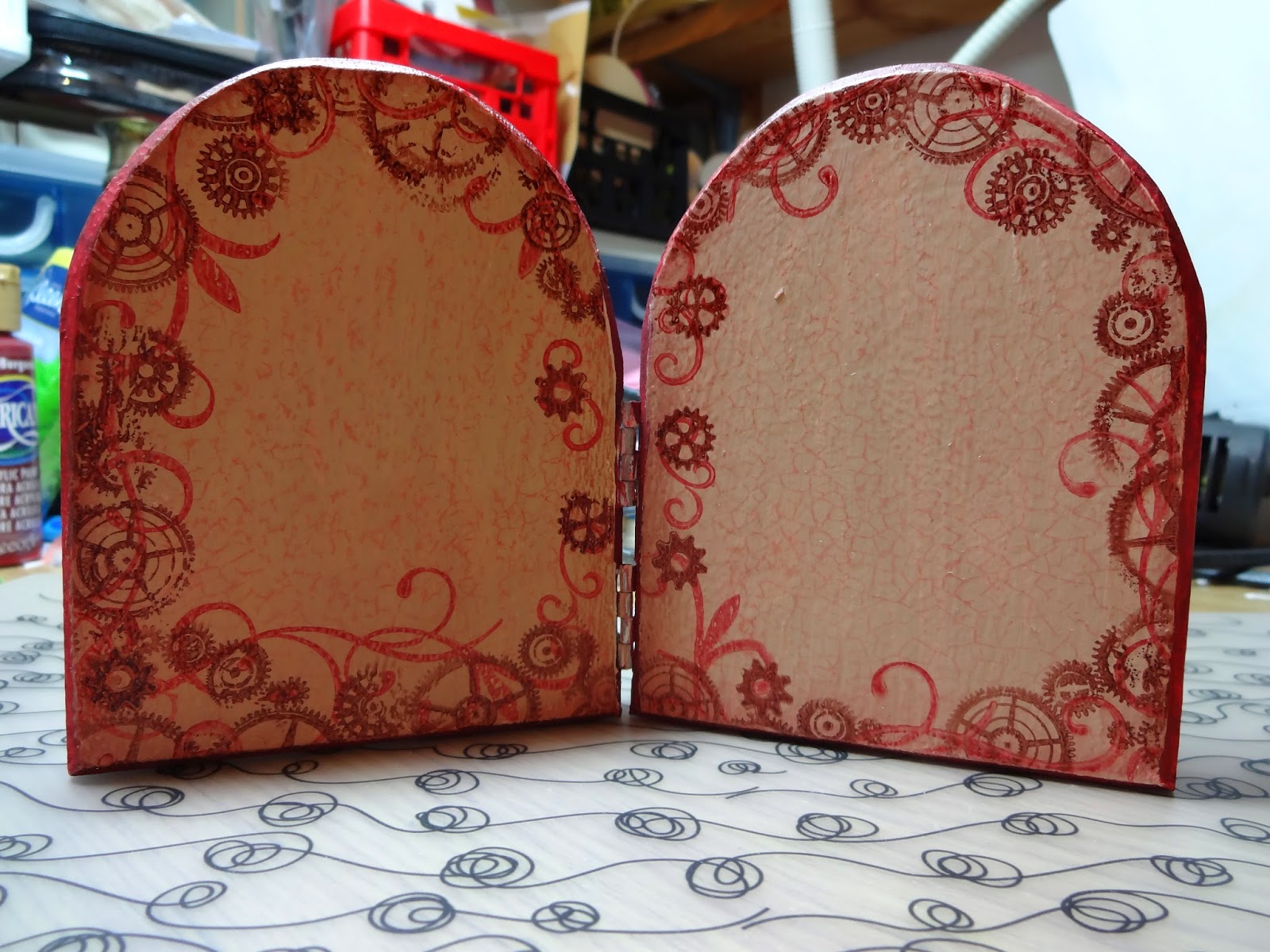 I had stamped the balloon image (Prima) and printed out a suitable quote onto the same paper, so I die cut the arch shape for each one, then brushed over with a selection of distress inks.  Then I sealed the whole surface with Mod Podge and at that point some of the inks I had used started to smear.  Luckily I was able to wipe off the excess and it had the effect of softening the whole thing - I would have hated to have another failure!  The quote hasn't come out well in the photo - it says:
"Everything which can be invented, has been invented"
Charles H. Duell of the US Patent office in 1899. 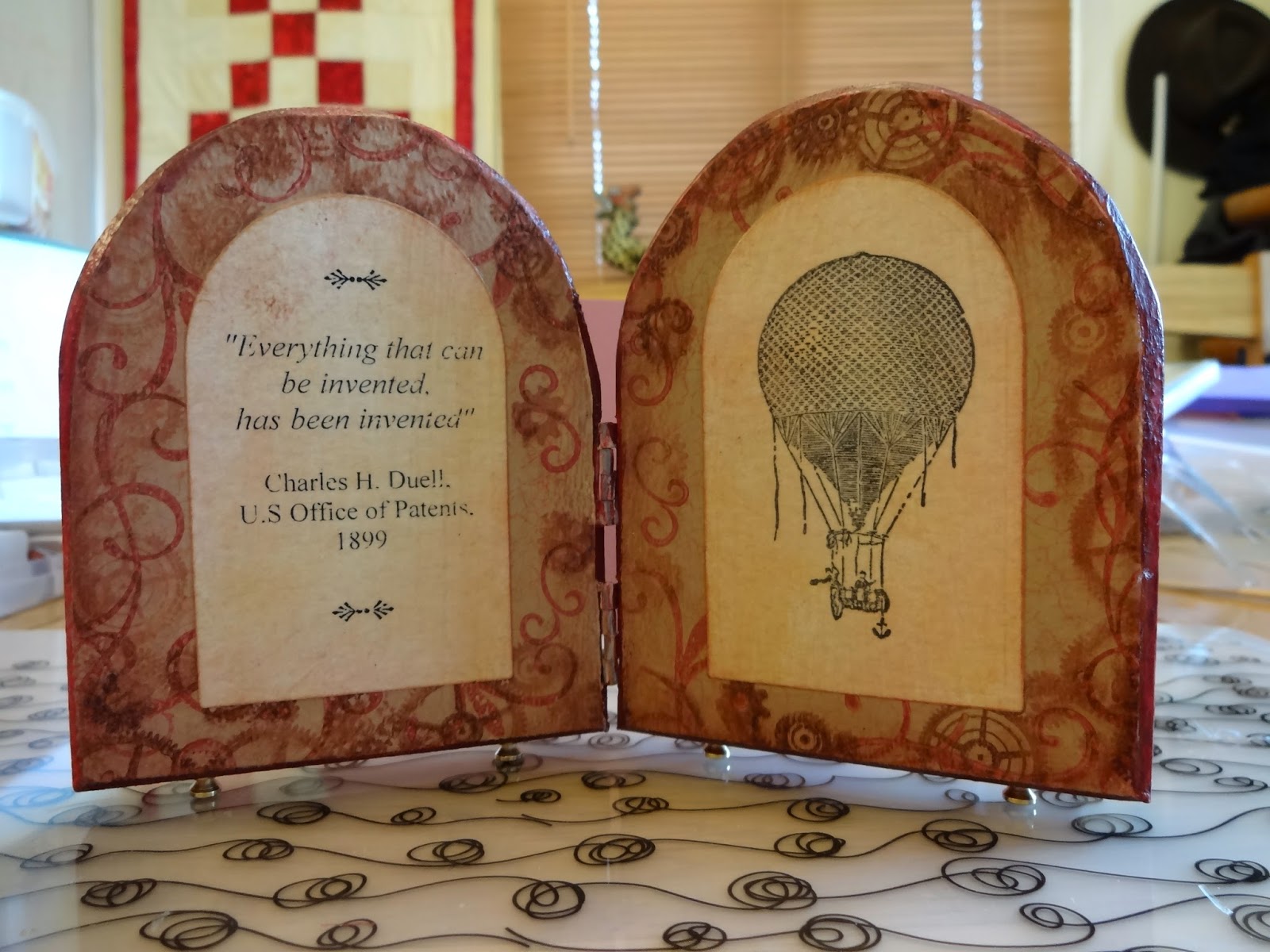 Then it was time for the front and back.  I had made rosettes, the larger of them has washi tape stuck along the straight edge before folding up, which gives a nice two tone effect.  A pearl swirl connects the two nicely.  The back has some embossed heavy weight paper (Papermania gears embossing folder), though the embossing is softened a little by the varnish I used to protect the piece.  Then I added some laser-cut gears. 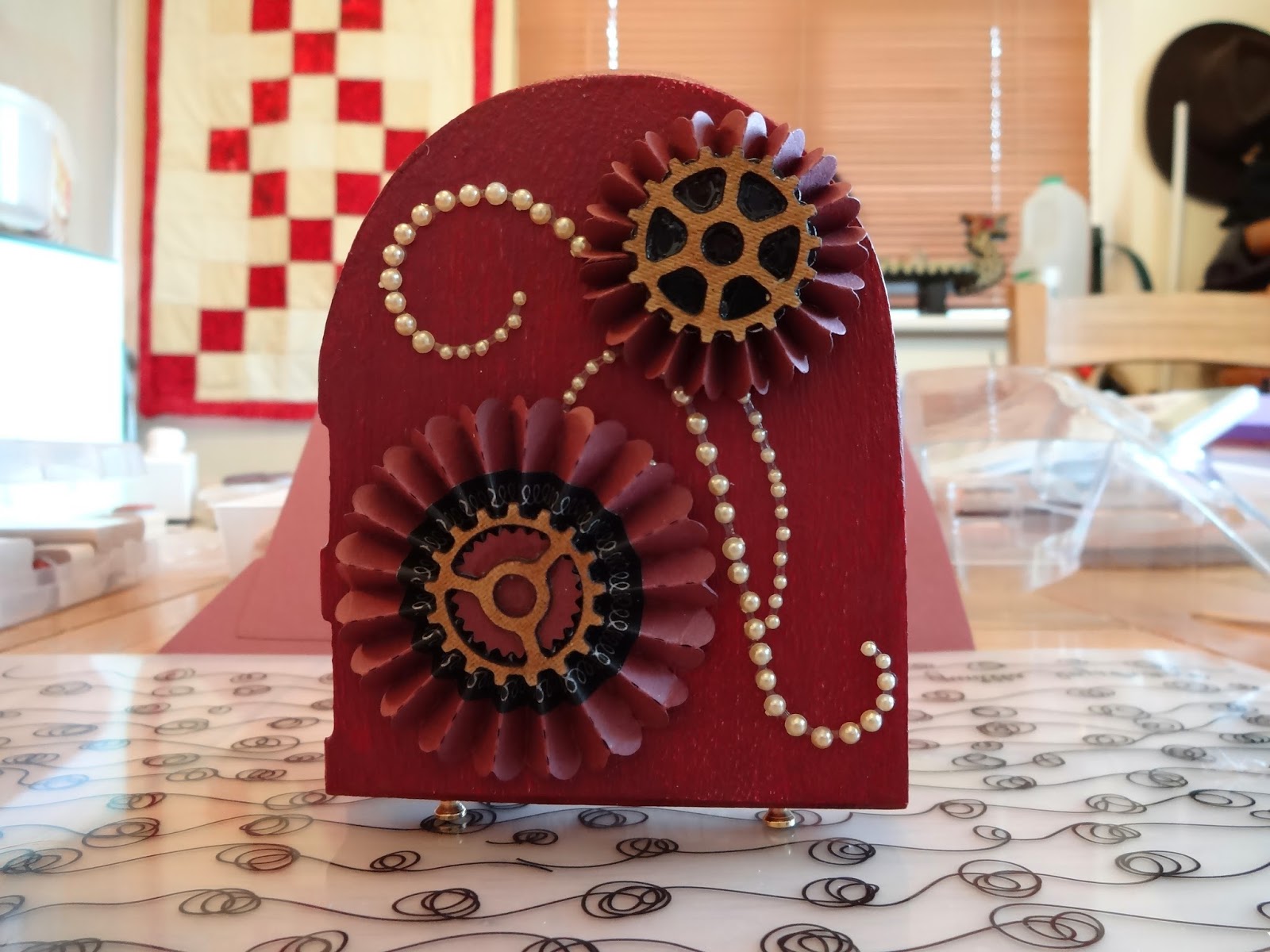 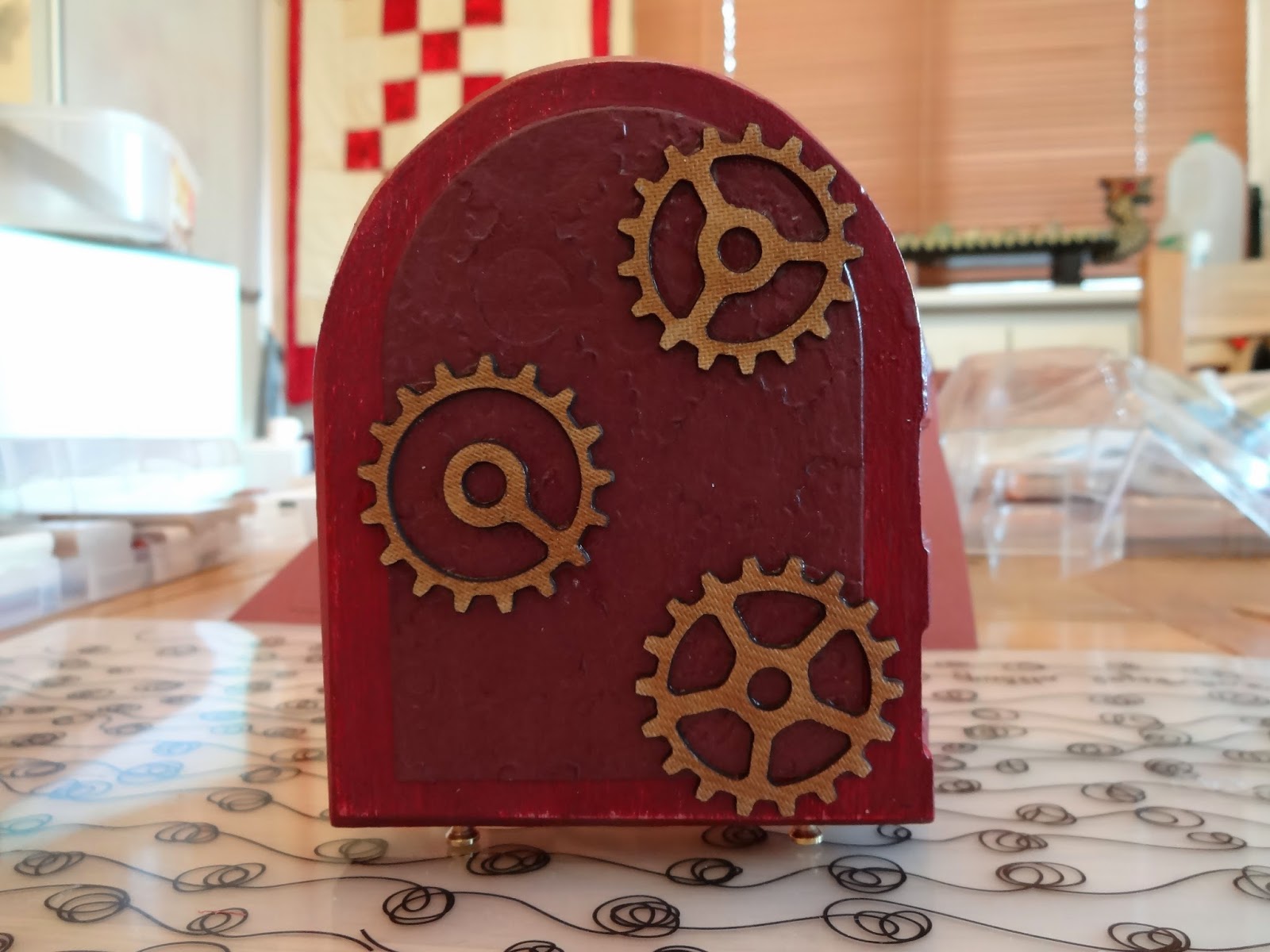 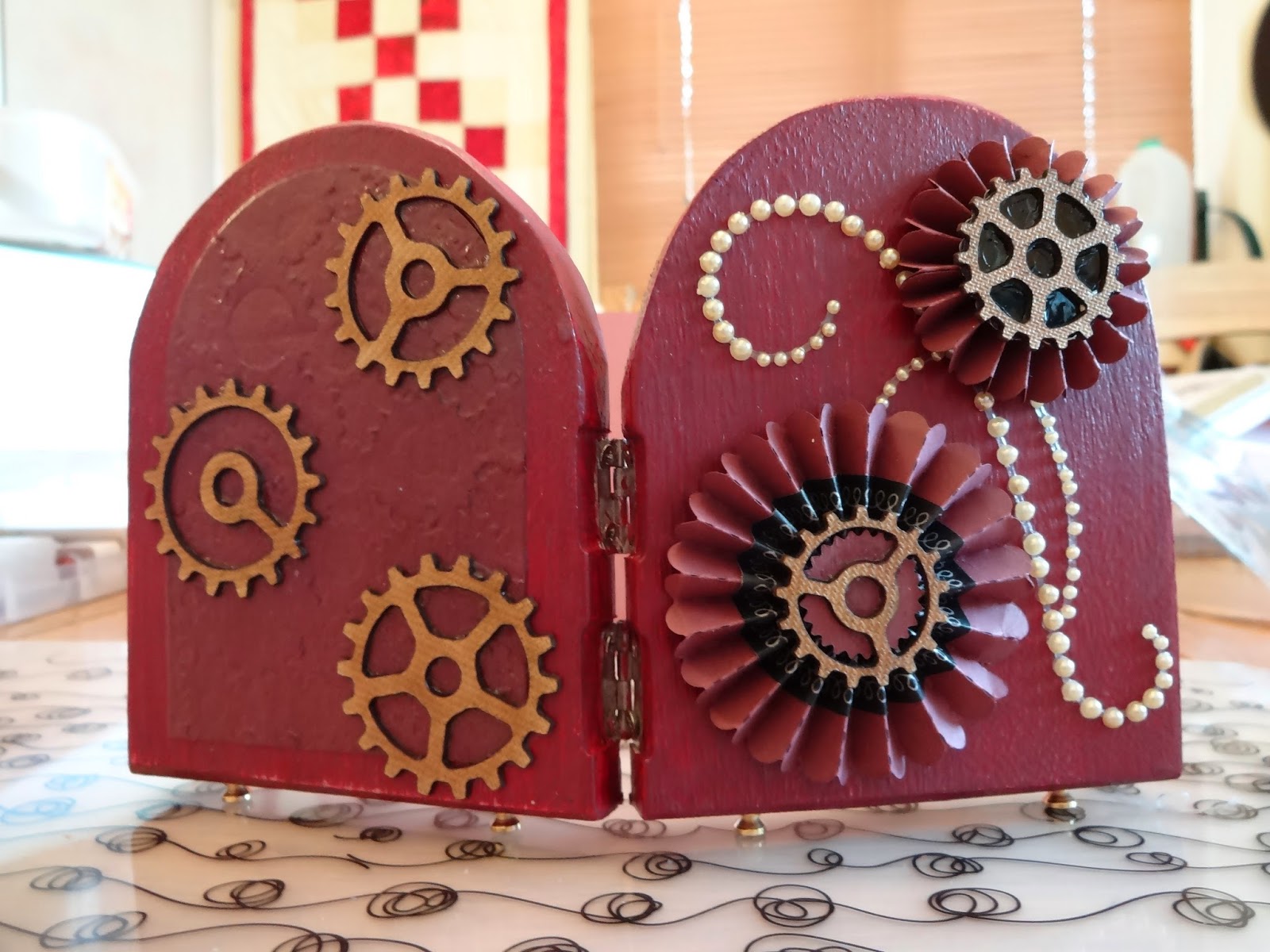 The final touch was to add feet - these are actually little drawer knobs meant for a dolls house chest of drawers!  I am so pleased that this is finally finished, I love it :-)
Posted by Wendy at 17:25 1 comment:

A while ago, I mentioned that my work colleague asked me to make one of these, after I did her a 45th anniversary card.  Here it is! 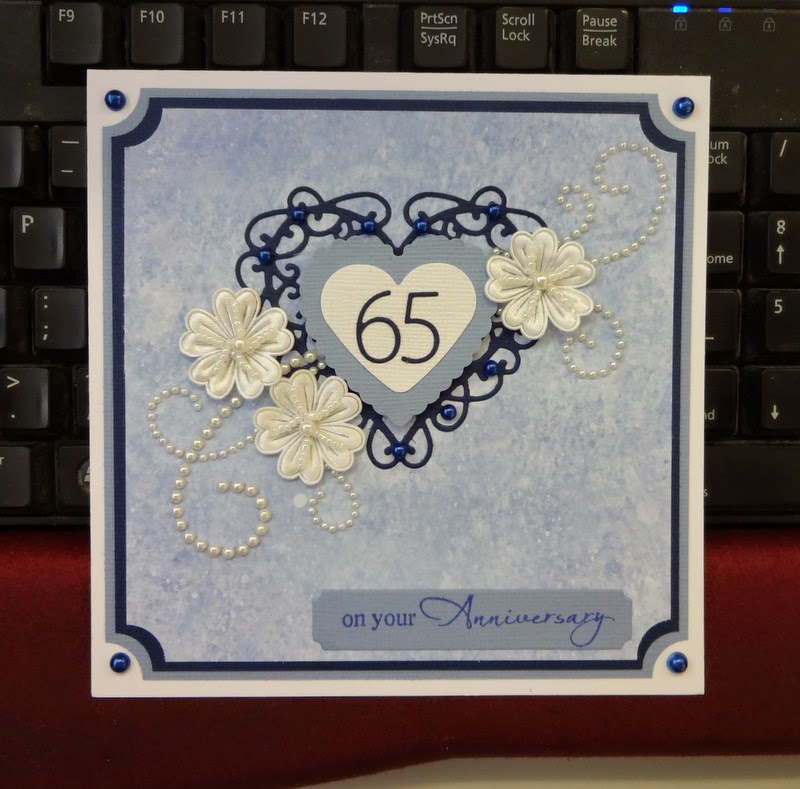 Based loosely on the aqua/peach card design I blogged recently, it has a double mat and invert-round corners, with pearls in the space created by the rounding.  The paper is years old and may be Hot Off The Press.  The twirly heart is done with a Cheery Lynn die, the two smaller ones are x-cut punches, the sentiment tag is a Dienamics die.  The sentiment itself is from Stamping All Day.  I bought the flowers at the Make it show recently, but have no idea from which stand!  I cut up some pearl swirls to finish.

I am rather pleased with this, I especially like the effect of the double invert corner mats and pearls, so you'll be seeing some more of those :-)