A Bit of a Distraction, Part Two

I had smooshed some of the bronze paint over some card and stamped over it with sepia versafine, using two different background stamps - cogs and marble - they had to dry overnight. I had also sorted out the pieces I wanted to use, the pendant was from a charity shop, the 'stones' in it were a yucky shade of orange so I had painted them with viva metal paint, in crimson this time. Unfortunately it had turned out to be a bit too pink and I had fallen asleep trying to think of ways to rectify this....... came up with the idea of alcohol ink!

So, this morning, I repainted the pendant with the ink - worked a treat - and cut two pieces of background card for the remaining two compartments. Then I glimmer misted the cogs that DH had cut, mostly in coffee shop, but some in brick, as each compartment was to have a touch of red in it. The square button was from my trip to Cardiff (I put some pearls on it to dress it up a little), the blingy earring came from the bling shop in Eastbourne, the keys were from Cardiff and Barcelona LOL.

Then it was a case of shuffling everything until it looked right, sticking a few more pearls here and there. The chain (also from the bling shop) went around the sides using super strong double sided tape. Because I hate dusting, I fixed a piece of acetate over the top and attached the two flourishes.

It was almost impossible to get a good photograph though....... so I hope these give you enough of an idea! I am really pleased with it :-)

A Bit of a Distraction, Part One

This is my week off, and I was supposed to be churning out cards like there was no tomorrow, with maybe a few ATC's and scrapbook pages thrown in for good measure....... but I made the fatal mistake of reading the new Craft Stamper magazine first. There is a project using a small compartmented tray - I thought "I've got one of those!" - and after that there was no turning back!

The tray is one that came with a lot of little embellishments in each compartment, I have kept it for years, always thinking that I could do something with it. First I painted it with Viva Precious Metal paint in bronze, it dries very fast on wood, so I didn't have to wait too long before the next step. I embossed some metal (Ten Second Studio: bronzed god) using cuttlebug folders in the big shot and cut pieces to fit two of the compartments.

I then sorted out lots of bits and pieces to go inside the compartments, with the thought that I wanted something with a steampunk feel, but had to wait until DH got home so I could ask him to cut me some cogs and gears with his laser cutter. 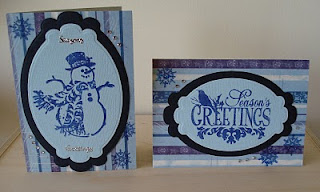 More Christmas cards, from ugly card blanks and scraps :-) The blanks are covered with paper from the scrap box and the mats are cut on the big shot with a nestie die ...... labels 10. It can be a little difficult stamping onto the textured side of bazzill, but they have come out OK, I think! The stamps are new, I seem to have had a run on buying Christmas stamps lately - shouldn't have gone browsing that auction site - they are the Inkadinkado Ornate Christmas clear stamp set.

I have a week off work next week, so hopefully will be getting on with some serious crafting and baking ...... :-) 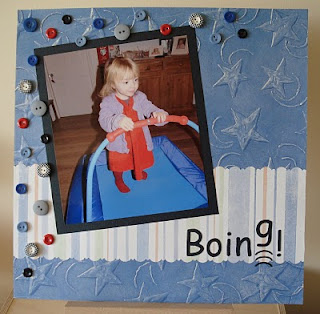 Another very simple Little Girl page. This is definitely a stash busting LO - I have had the papers for years, the buttons are dug out of the button box, and the title is cut out of a scrap piece of bazzill using the craft robo. The edges of the striped section are done with an EK success border punch.

First, an update on the accordion book ....... she loved it :-) It was displayed on her desk for the whole day and she told everyone who asked that I had made it - it got a little embarassing in fact! 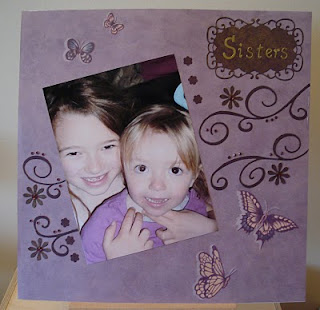 I worked on Little Girl pages over the weekend, I am trying to keep them simple and relatively quick. The butterfly paper is from Provocraft Soft Suede scrap pad, the title is done with a die cut frame out of one of the glimmer misted card blanks and some peel off lettering. Die cut scrolls, punched daisies and several gems here and there complete the page.

Oh and another update - my car is fixed! It had to have a complete new door, but is now back home with me - thank goodness as the hire car I was using was awful :-) 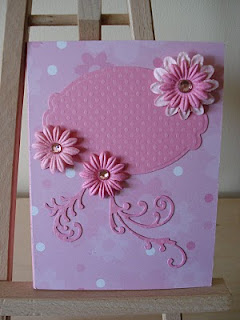 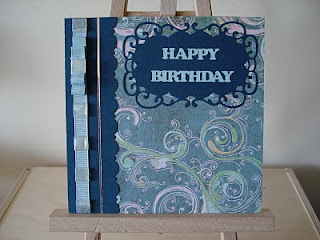 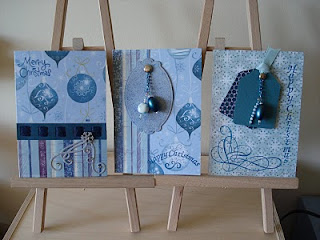 I have had a bit of a play around today and have reduced the ugly card blank stash by five :-) These are all covered with various papers from the scraps box. I also managed to use up some of those pink blossoms!

The pink card will have a sentiment put on when it is used - probably will be "happy birthday", but just in case I need to put "get well soon" or something else on, I have left the pink mat blank - the mat is made with one of my new nestabilities dies, and the scrolls are from a Marianne D frame die. The blue birthday card uses the frame from that die, with ribbon and small mosaic tiles down the punched side border - punch from EK Success.

The Christmas cards - yes I know it's a bit early for the C word, sorry! - are inspired by both Karen and Sy. Karen stamps sentiments directly onto her cards, something which always terrifies me as I always think I will mess it up! Sy mentioned beaded charms on her blog the other day, which set me thinking ....... and after much cursing and bead hunting on the floor today, these are what I came up with :-) The silver scroll attached to the woven ribbon strip is a sizzix die and the oval on the second card is the same nestie die as on the pink card, cut out of one of my previously glimmer misted card blanks. The tags are punched, with the tag at the back being covered in holographic mesh. I am rather pleased with them all :-)

This is the accordion book I made over the weekend. A colleague at work celebrated her 60th birthday recently and I had taken some photos of her sitting by her "decorated" desk. I wanted to make her some sort of keepsake, but I only had 5 photos, one of which wasn't very good! While I was musing out loud about taking some of the pages out of a ten page mini book, Sy came up with the idea of an accordion book using card blanks glued together. Well, as you know, I am desperately trying to reduce my card blank stash at the moment, so it was an ideal solution!
Just one drawback - I had to buy blossoms....... I have never bought any, I am just not a flowery person! But I can use them on cards (which get given to other people!) and in Little Girls album, so it's not a total loss.......
I started the book at Karen's on the Saturday, having made a mock-up first to see how it worked. The cards were glued together, photos stuck on, eyelets attached and ribbon threaded through. On Sunday at the crop, I punched out small flowers to cover the back of the eyelets and then spent ages moving a swirly die cut and the pink flowers around on the front of the book until they looked right! A peel off sentiment and some pearls completed the look. My colleague comes back from holiday next week, so I hope she likes it :-)
Meantime, I am thinking of what else I can use these stash-busting accordion books for....... mini recipe books come to mind....... 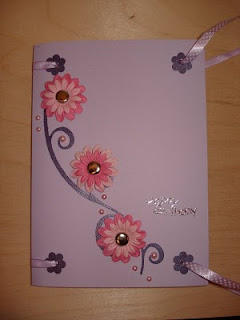 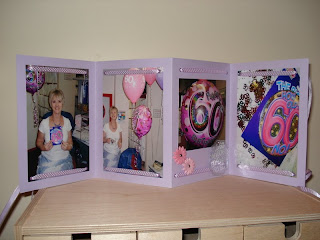 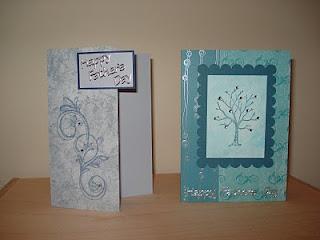 Two Father's Day cards to share with you today :-) They are both made from the bargain pack of ugly card blanks from that well known shopping channel, covered with papers from my scrap box. I have covered quite a lot of them now, and glimmer misted others, I only have about a quarter of the pack left so there is light at the end of the tunnel. One day I will be rid of them ..........!

I took my car into the repairers yesterday, for them to make an estimate to send to the insurers. They warned me that the insurers might not consider it worth repairing due to its age, I was quite dismayed as it runs so well and will keep going for a few more years yet! But today I got good news - they will pay for the repairs and it is booked in for Monday. Phew......... :-) 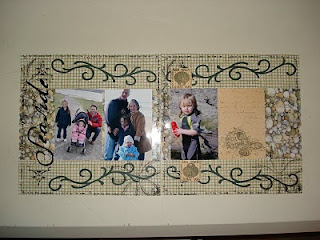 The first weekend of the month was, as usual, our craft weekend. On Saturday Sy and I went over to Karen and on Sunday we went to the crop at Cardinal Colours. The journey over to Karen's was eventful - a mature gentleman pulled out of a garden centre entrance.... right across the road and straight into me! He hadn't seen me, he said. Luckily it was all at slow speed so my door is dented but I am not :-) I had to be plied with sugared tea and jaffa cakes once we got to Karen's though LOL.

I did some cross stitch and - with Sy's guidance - an accordion book on Saturday. The latter is for a colleague at work, it's not quite finished yet. On Sunday I did 7 LOs, most of which need titles adding but I did finish the above DLO for Little Girl's 3rd album. I found the "seaside" transparencies in my paper stash (had completely forgotten they were there!) and the paper is from Provocraft, their River Rock scrap pad - I bought it in the States a few years back, not sure if you can get it over here. The swirls are cut on my new Big Shot - (whisper) - DH still doesn't understand why I bought it when I have a craft robo....... The small shell stamp is the free one with Craft Stamper and the larger one..... well I have had it a few years now and I have no idea what it is! Oh and I should say this LO was based on a pagemaps sketch, though I did wander from it a bit :-)