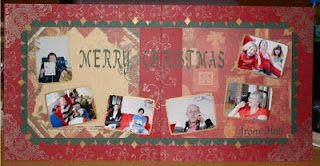 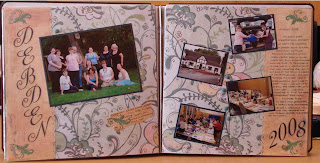 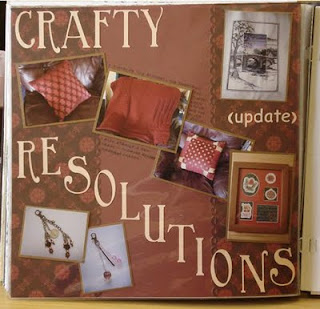 Turns out I didn't have much time to bake for the freezer (other than some bread), because I spent the entire rest of the wek getting ready for a scrapbooking retreat :-)
Karen and I travelled to Debden together, my car was full to the gunwhales with bags of paper, trimmers, embellishments..... you name it, we took it! I took along my entire collection of punches - they filled seven boxes (and a large portion of the car boot!). The journey wasn't so good when we had to queue for the Dartford tunnel from 8 miles away.... I have never done 8 miles in first gear before, and hope I never will again!!
Still we got there eventually, it took a while to unload the car, but then we could finally get down to some serious scrapping. Over the weekend I managed to finish off my 2008 album, apart from a couple of bits of journalling, and start my Venice album, which had proved very difficult to choose photos for..... In all I managed a total of 15 pages, then I ran out of photos! Did some stamping and made a couple of ATCs, then the weekend was over :-(
The journey back was a lot quicker and after I had got back from dropping Karen off, I collapsed in a heap on the settee with a nice glass of wine :-) What a fabulous weekend!

Yesterday I finally, after some months of saving, got my brand new freezer. I went for a frost free one as I was so tired of having to defrost the old one every 6 - 8 weeks....... So yesterday morning DH got the old freezer out of the kitchen before he went to work and I waited for the delivery men, who turned up at about 8:10.

They got it into the kitchen, but after much umm-ing and ah-ing, decided it wouldn't go into the slot without other things being moved, which wasn't their job, so they left. I asked them for the cardboard box it had been packed in so that we could move it around the kitchen without damaging the floor, but they didn't want to take the polystyrene out of the box and didn't have any other empty ones. Then they drove off, leaving me with an barely accessible kitchen (it's galley shaped, so a freezer in the middle fills it up quite substantially!) and worrying about having to move everything.

10 minutes later it dawned on me that if DH had got one freezer out on his own, couldn't the two of them have got one in, reversing what he did???? Why is it I never think of these things when I am actually talking to the delivery men???

When Sy got here on Friday, we did samosas and the minty, yellowy dip which we invented a few weeks ago and which I promised you all the recipe for! Here it is, though I forgot to take a picture and then we ate it all :-)

Put everything into a blender and whizz until smooth. It is quite thick rather than drippy, you could thin it either with a bit more syrup or maybe some yoghurt.
Posted by Wendy at 09:05 No comments: 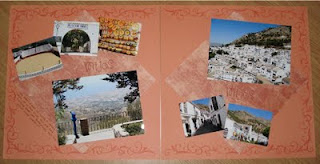 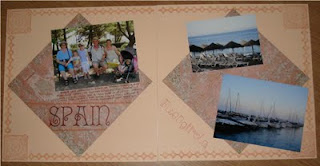 Well here are the other two DLOs I did over the weekend, as promised! They are quite simple, an 8" square of DCVW Old World in the centre of some bazzill aztec and sienna, with stamped borders and corners. Unusually for me, the photos aren't matted, I didn't think they really needed it.
It's the first weekend of September! That can only mean one thing, Saturday is a craft day and Sunday is a crop day :-) Sy is on her way here as I type and everyone else (Karen and Eve) will be here tomorrow. We are going on a long-planned expedition to the Craft Barn in Lingfield! Though I don't think I will be spending as much as I did at the Glitter Pot, since I have other commitments this month, such as buying a new freezer! More on that another time.
Posted by Wendy at 20:19 2 comments:

What a weekend that was! Not sure where it went, but it was good while it lasted. DH and I tackled the half of the study that usn't occupied by my crafting stuff, and managed to make it organised enough so that not only can we find things, we can get to them too...... :-) 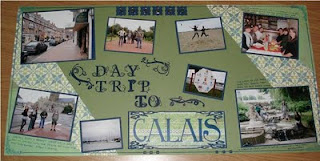 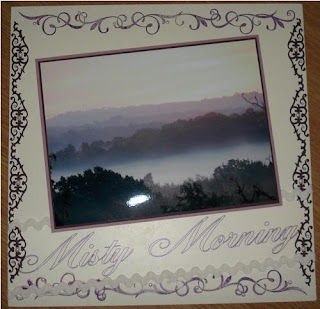 I finished 6 pages that I had started at the previous crop, 3 double LOs, will post the other two tomorrow. I also did Misty Morning from the page kit I had made up from the crop but not got around to starting - just as well because the finished page is very different from my original idea :-) It hasn't photographed very well - there is a flash reflection in the photo and the purple colours look more brown... trust me, it's better in real life and I am very pleased with it. Calais is what I call a "serendipity page" - a page resulting from desperate attempts to cover up mistakes, which ends up as a good page you would never have thought of otherwise! No, I am not going to say where the mistakes were......

I also roasted a huge turkey on Sunday, which was lovely ....... as were the turkey sandwiches and turkey curry we had on Monday .... and the turkey sandwiches today ...... should be having the last of it tomorrow :-) Oh apart from the two bags of chunked meat, the three bags of turkey & gravy pie filling and the pints of turkey stock that are in the freezer!
Posted by Wendy at 20:50 6 comments: