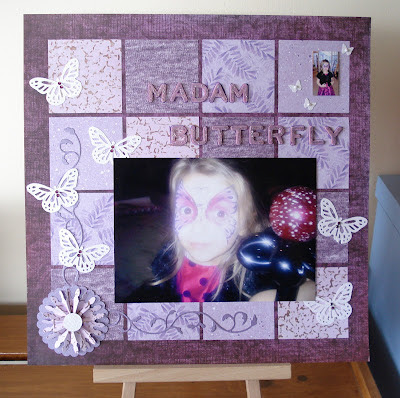 Little Girl coming home from a party with her face all painted up :-) Not a brilliant photo, but as you know they are so bad at giving me any photos at all, I have to work with what I get! And after I had done this page, they sent over a whole batch more which included a better shot of the face paint, so I put a small picture in the top corner - really didn't want to do the whole page again .........

This started out as the Scrapology Challenge sketch, but I seem to have moved away from it quite a bit, so I am not entering it into the challenge LOL. I found papers in various shades and patterns of purple, from stash, and punched out 16 squares. I then used a darker purple background paper to make a frame. Interestingly, as I chose the papers, I thought that they didn't really 'go' with each other, but when they are arranged in small pieces, it seems to work! The darker background seems to bring them all together.

The rosette is die-cut with a Memory Box die (Gothic rosette) and matted onto a punched scalloped circle. The flourishes are another MD die. I made the butterflies with two Martha Stewart punches and added gems. The title is done with American Crafts Thickers, they were originally bright pink, but I coloured them with a Copic pen and then ........ (whisper) ....... stickled them ..... this is the third and final use of stickles in this album!!!

And that was it - the trickiest part was lining up all the squares to form the grid, if one of them is even a little bit out the effect is ruined LOL Thank goodness for repositionable herma, that's all I can say.......... :-) 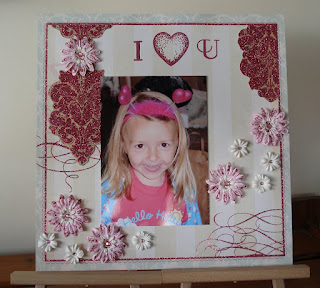 I do hate that "I 'heart' you" expression....... but it fits the page! This is probably the LO I like the least in the whole album - it's so pink and glittery and flowery LOL. The papers are from one of the kits I got at Sarahs Cards retreat, the idea of cutting out the glittery pieces came from that kit's instructions. I used one of the cut out pieces to cover a birdcage image on the background sheet and the other for balance at the other side - the glitter swirls were already on the paper. The title is stamped and embossed, the heart stamp is a Craft Stamper freebie. I tried to apply stickles artistically to the pink flowers, but the dratted stuff wouldn't go where I wanted, so ended up just being smooshed all over LOL. Some plain white flowers and a few gems for centres and that was it :-)

The handover of the album went very well, they loved it - Little Girl especially liked this page and kept telling me how the headband kept falling off whenever she wore it :-) Now why can't I get that sort of information before I make a page??? Then I could actually put journalling on them!!!

This must be the pinkest page in the whole album .... so things can only get better from here on :-) 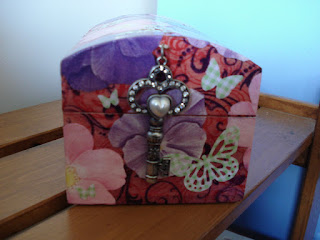 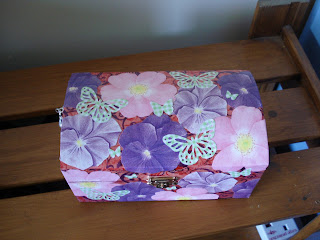 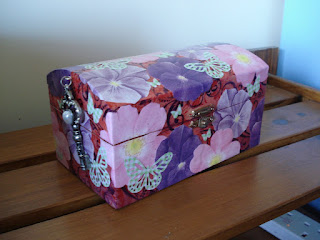 Little Girl's Big Sister had been admiring my collection of Primark junk jewellery which I buy to pull apart and use as embellishments. She especially liked this key and I asked her if she would like me to make her a treausure box with the key to decorate it. Her eyes lit up, "ooh yes please!" she said :-) That was just before Christmas, and I glimmer misted the box in pink and a bit of purple ........ then put it to one side and promptly forgot about it in all the rush to get Little Girl's album finished.

Yesterday (Sunday) was handover day, and on the Friday before I had remembered the box and realised I had better get on with it, as Big Sister was bound to remember! So I overstamped the box with flourishes in pink stazon and at that point it looked really pretty ........ then I made the fatal mistake of thinking it needed a few darker flourishes. So I over stamped in what I thought would be a slightly darker colour, a purple. Oh dear :-( it was waaaaaaaaaaaaaay too dark, but once I had done one, I had to stamp all over as I had started in the centre, not a nice sensible place like a corner where one dark flourish might have looked OK ..... oh no.

So having ruined it, what to do next??? I had intended to use two or three of the flower cut outs which I had found lurking in a drawer, so instead I decided to cover most of the box with them and hope that the swirly stamping would look like an intentional background LOL. I also punched out some butterflies from some green gingham paper and put a few of those on.

The art of flat decoupage is to make it look as though the printed images are almost painted on, this being achieved by several coats of varnish - the edges of the prints are supposed to disappear ....... well I didn't quite manage the 'perfect' decoupaged surface, but after four coats of varnish I thought ...... that'll do ......!

I put a tiny screw-eye at the end of the box to hang the key on, and that was it! It doesn't look too bad, even though it is so pink and flowery LOL, a shame the light was so bad when I took the photos, it does look better IRL. Big Sister loves it :-) 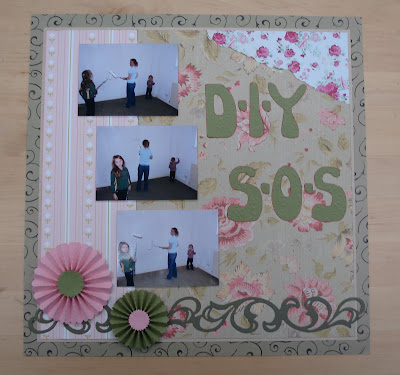 The arrangement of the papers in this LO was inspired by a page seen in the UKS gallery - I don't now know whose, if anyone can enlighten me, I will credit!

There are five different papers from stash in here - I think the two very flowery ones were given to me by LG's mum. Since the LO is about decorating I wanted the papers to look like torn back layers of wallpaper.

The title is robo-cut (font: Syreeta) and then I put the letters through the Bigshot using a flowery embossing folder. The rosettes and swirly strip are both Sizzix dies. 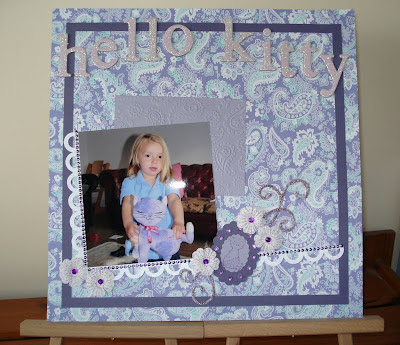 Another stashbusting LO! I have had this paper for years and have no idea what it is, but am glad to have used it at last :-)

A lot of cutting on this page - the scallop border is robo-cut, the ovals are punched, the swirls are die-cut and I hand-cut the frame! The embossed piece of cardstock is done with a paisley embossing folder. I overstamped the white flowers using purple ink and added gems to their centres.

I used purple nailheads along the border, the cat stamp was a Christmas present from LG's mum and the letters were from the goody bag at the Cardinal Colours retreat last year - must admit, I never thought I would use these glittery letters ...... but here they are! 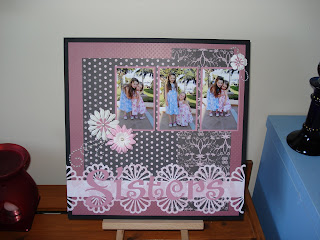 I matted some Bazzill dotted Swiss onto black cardstock, then layered the pink and black papers (from stash - no idea what they are, although maybe Paper Salon) over the top. The border is done with a Martha Stewart daisy fan punch and the title is robo-cut (font: Santas Big Secret), then I added some flowers and blingy swirls to finish.

Reasons to be cheerful 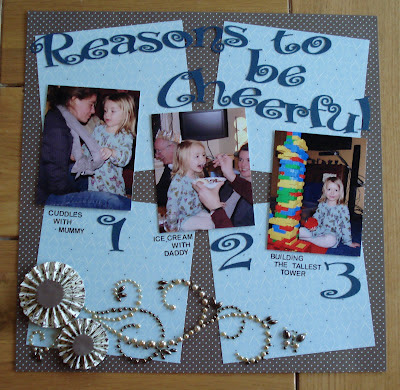 This is the other LO I used a song title for, as mentioned briefly yesterday. It is also one of the very few pages I have ever done a complete restart on, having ripped up the previous version!

The papers are from Paper Salon, both for the background and for the rosettes - yes I have succumbed to a Tim Holtz mini rosette die. After the trouble I had scoring and folding one by hand at the retreat, die cutting is the way to go! The title is robo-cut (font: Boingo) and I added the captions using 5mm peel off letters from Craft Creations, very fiddly but I like the effect. The bling swirl has been in my stash for about three years now, I am glad to have finally used it up :-)

Girls just want to have fun 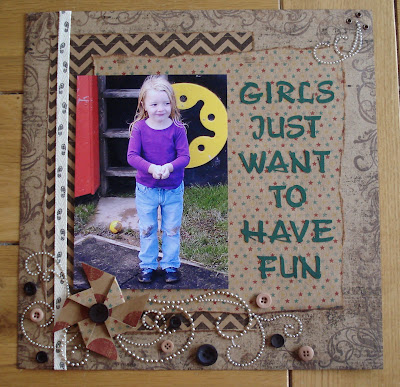 Finally, after much pleading and begging for photographs, the 4th Little Girl album is finished and ready for handover a week today. It's going to take a fair few posts to share all the pages with you!

To start with, one of my favourites from this album. I am not really a fan of kraft paper, but when I saw these papers (My Minds Eye?) at Sarahs Cards retreat, I bought a few with this photo in mind - and my table mate Mandy gave me the length of muddy footprint twill ribbon when I described the picture to her - thank you Mandy!

I stamped swirls all round the edge of the background sheet, then tore two different pieces of patterned kraft and inked the edges. Then it was just a case of layering everything up. I made a windmill and cut up a couple of bling swirls to go around it, then added some buttons, with a little cluster of eyelets & bling in the top corner.

The title was the main problem - I hadn't been able to think of one since having the page idea at the retreat, all that came to mind was something to do with being wet and muddy....... but I had had a similar problem with another page and had used a song title for it and suddenly the lightbulb came on - 'Girls just want to have fun' - perfect! I robo-cut it (font: Polo) in green to pick up the pattern on the paper.

This page is well out of my comfort zone with its torn and inked edges, kraft and general grunginess, but I really like it. And, do you know, I have been tearing and inking edges rather a lot since the retreat - I might even be getting used to it........ gasp!