I am not able to do any crafting at the moment due to an inner ear infection - I have actually been officially signed off work, for the first time in my life!!  I have been given tablets to treat the constant dizziness and they seem to be working thank goodness, so that just leaves me feeling completely wiped out :-(  So I am using the opportunity to slowly catch up with blogging everything I finished at the retreat ...... then going back to bed! 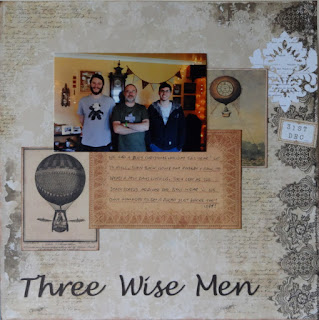 This is a photo of DH with DS1 & DS2, taken just before they left after Christmas.  It was mostly done, just needed title and journaling, but I was really stuck for the title!  A few days before the retreat, I fell asleep thinking of page kits to pack - as you do! - and it just came to me, luckily I remembered it when I woke up the next day LOL.
The background paper is quite an old one from stash, I think it may be Prima, the journaling and image panels are Marion Smith.  I made the lines for the journaling using a Stampin' Up line stamp.  The title was cut on the Silhouette, I used the 'weld' function to join the letters.
Pleased with this one :-)

Another 'finished off' page - it only needed journaling, but for a long time I had been stuck on quite how to add it.  At the retreat, I was looking through some papers and found one with a square pattern ..... so I cut out the squares and used those to write on! 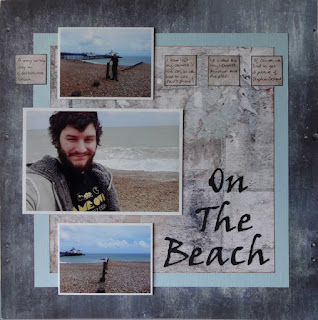 The photos are of a very windy day at Eastbourne, I had managed to leave my camera in the car, so we used DS2's phone to get some pictures!
The papers are from Studio Light and the title is cut on the Silhouette.
Quite a simple page, but effective, I think :-)
Posted by Wendy at 13:06 2 comments:

Another layout started and finished at the ATDML retreat!
I am finding that I don't take so many photos nowadays, apart from holidays when we take hundreds, so I am short of material for non-holiday layouts.  Krafty Karen suggested that I try scrapping older photos, or old favourites which may have been scrapped before, but deserve another look.  I found this concept a bit daunting, since I scrap strictly chronologically!  One year, one album.  But I have embraced the step out of the comfort zone and now have an album for a Miscellany of Incidental Pages ...... LOL.
This is the first incidental layout, it's an old favourite photo of mine from 2002, DS2 dressed as an alien for the Scout carnival float.  We sprayed some old clothes and a swimming hat silver, made him a sign and constructed a rocket back pack from sprayed fizzy drink bottles and duct tape! 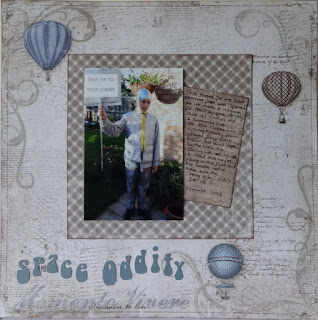 It's quite a simple page, I have let the background paper (Maja Designs) do all the work and used another of their papers for the central panel carrying the photo and journaling.  The title was cut on the Silhouette, I wanted a font which I had previously seen in passing and thought might be called Bellbottom, but wasn't sure .... happily I found it on one of the free font sites, downloaded it and was ready to go!
I really like the way it has all come together :-)
Posted by Wendy at 20:47 2 comments:

A month and a half since the last post... oops....  time to catch up a bit :-)
Last weekend, I went to the ATDML retreat in Suffolk.  I got back late Sunday and we flew off to Paris very early on Monday, so this is the first chance I have had to share the pages I got done!
This one is done using the current sketch from My Creative Sketches: 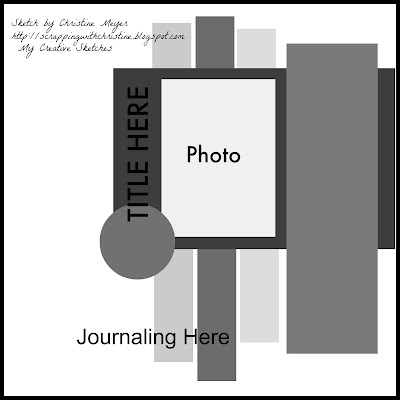 and here is my take on it: 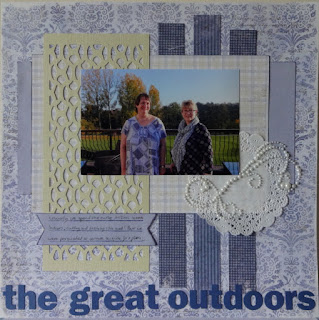 I didn't like the sketch at first look, I felt that the large block on the right was just too... well, large and blocky!  But I thought about it and decided it could be a lattice to reduce the in-your-face-ness of it.  So I cut a lattice on the Silhouette and packed it into the kit when I was preparing the papers etc.  When I actually came to make the page, I thought I would also try flipping the sketch and I like it much better this way :-)
The papers are from Maja Design, apart from the plain blue from Craft Creations.  I cut the title with an alpha die, from either Memory Box or Dienamics, not sure which.  It just fit across the page!!  The title comes from the fact that we never go outside at a retreat, too busy!  But we were tempted out by a photo opportunity LOL.
This is my second attempt at scrapping this photo and I am much happier with it than previously :-)