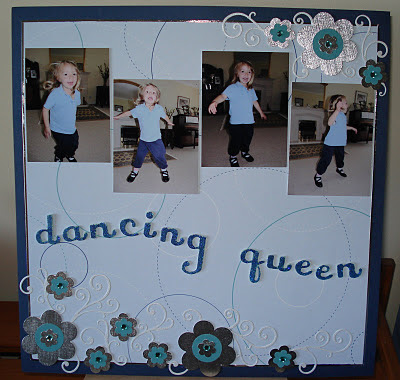 This Little Girl LO is a 'serendipity' page - one which has come about due to my having to cover up mistakes, but has turned out well in spite of it!

I had messed up the edge of the patterned paper when I tore it and it looked awful when I matted it onto the navy cardstock stock. So I put a silver peel-off line to act as a frame over the edges, didn't look too bad but there were still some places where the mistake was obvious. I punched out a couple of flowers in silver linen effect card to hide those, then some more to balance the whole thing out. Then I added centres and gems.

The flowers needed a bit of grounding - they looked as though they were floating in the middle of nowhere! - so I christened a die which Karen had given me for Christmas, a very swirly one. I cut out four of them, then proceeded to cut them up into little swirls and placed them amongst the flowers. They are cut in Bazzill Bling Diamond, and they do show up a bit more than it would appear from the photo!

The title is done with some American Crafts Thickers, which in the packet looked as though they would be a good colour, but once they were stuck down were definitely not! I did try to unstick them but the paper started to tear so ....... I took a blue copic pen and brushed over them gently. Result! 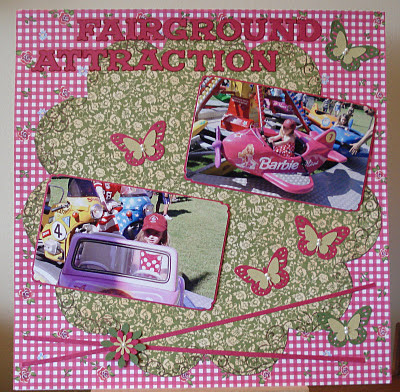 This is the Little Girl LO which uses the other side of the paper described below in Snow White. I had allocated it to this photo first until Sy pointed out that the chintzy flowery side matched SW perfectly ...... LOL. I took the scalloped circle I had cut out, turned it over and overstamped the edges with flourishes in brown ink, then matted it onto another paper gifted by LG's Mum. The photos are matted onto bright pink Bazzill (maybe Pinkini? - I have forgotten LOL) and I robo-cut the title from the same pink.

I punched out the base butterflies with a Martha Stewart punch kindly lent by Karen, then robo-cut the smaller butterflies and added some pearls. The whole thing needed just a little extra 'something' so I cut two narrow strips of the pink cardstock and punched out a multi-layered flower with Woodware punches. 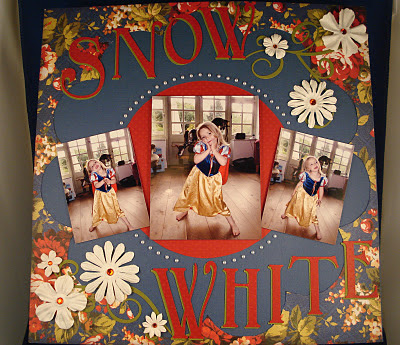 Little Girl's Mum usually buys me a random selection of 12 x 12 papers for Christmas - this is one from a couple of years ago which I thought I would never use. As it happens, the paper is double sided, and while I was matching papers to photos I found that each side went perfectly with a different set of pictures! What to do.......?

I cut out a scalloped circle shape from the centre and put the cut out piece to one side, to use with the other photos. Then I cut a plain circle out of bazzill swiss dot in red (can't remember the exact colour name). The photos were positioned and mounted on foam tape, then I put pearls around the circle.

The title is robo-cut (font: Birmingham) in the same red, but when I laid it out, it didn't look quite right, so I cut it in green as well and offset the red over the green for a shadow effect. Still it needed something more, so I die-cut a long swirl, split it into two, then placed flowers over it, with some gems for the centres. 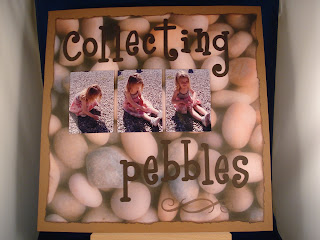 A nice and simple Little Girl LO :-) The pebble background paper is from stash - I don't know how many years I have had it! - and I have torn and inked the edges, then matted onto a sheet of Bazzil Cinnamon Stick. The title is robo-cut (font: boyzrgross) in Bazzill Java - it has photographed as two different browns, all I can say is that it is from my first ever session using my new photo studio booth and that I really need more practice in setting up the lighting! A simple stamped swirl under the title to complete the page.

So ...... about those resolutions ......
For me, 2012 really has to be the year of Use It Up. I have an obscene amount of stash, plus projects, kits, UFOs, items to decorate, you name it. I also have stuff I bought because I wanted to try it out, like resin casting and serious beading, I have so much beading equipment and I only really make simple things like earrings and charms, so I need to improve on those skills too. Then there is all the fabric and the cross stitch kits ....... you get the picture! 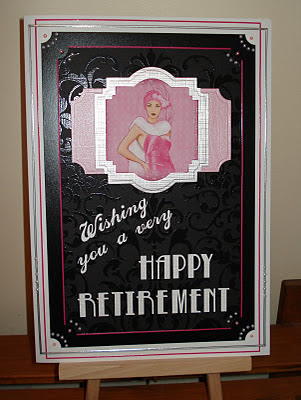 I couldn't blog this until it had been presented to my colleague at the end of December. It was actually made right at the beginning of the month and then spent a couple of weeks being circulated around for people to sign. When another of my colleagues asked me to make it, I was in a cold sweat - I have never made an A4 card before and it was really important that I got it right!

She is very into Deco style, so that was what I went with. The base card is a white linen A4 blank from Craft Creation. I then cut a panel from black gloss card and a smaller one from Bazzill glazed cardstock. I punched inverted corners from both of them and attached to the base. The borders around the edges are done with peel off lines in silver and pink, then I put pearls around the corners of the two black panels and also some along the silver lines, to hide where they joined!

I had the image from some papers which came with Making Cards magazine a while ago and I die-cut it with Nesties labels 22 , matted it in silver using the next size up, then put the whole thing onto another mat die-cut in pink Bazzill Bling (Feather Boa) using labels 21. I really like the way these two labels mat together.

The title is robo-cut from Bazzill bling in Diamond, took a lot of fiddling around to get it in the right place! After I had attached the title, it was in theory finished.... but it didn't look quite right...... the central black panel didn't stand out enough, so I put another border using the pink peel off lines around it.

I decorated an A4 box for her to keep it in (no photo, sorry) using the same theme and colours. 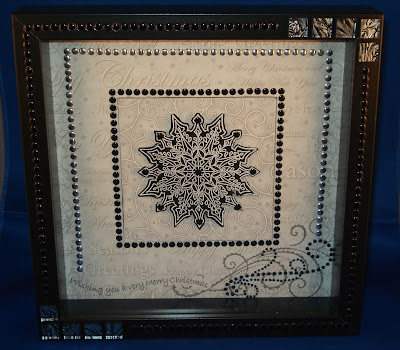 I had had the bits and pieces for this festive picture lying on my desk for the two weeks leading up to Christmas - but had no inspiration as to how I wanted to put them together. The lightbulb moment came on New Year's Eve and it only took a couple of hours to make once I knew what I was doing!

The Ikea box frame was already black, so I didn't need to paint it. I used two background papers from Craft Creations in grey/white, and stuck to two squares of mountboard (and what a pain to cut that was.....!). The snowflake was stamped and embossed in white onto black gloss card, then cut out. I stamped a sentiment and flourish in Versafine smokey grey, then added a bling flourish over the top. The central square has a border of black nailheads and the outer border is done with silver ones.

For the frame itself, I knew I wanted to use the silver/black mosaic tiles, but didn't want to put them all the way around - so I have just used them in the corners and connected them with more black nailheads. The tiles haven't photographed particularly well, though, they are truly gorgeous in real life! The good thing about the Ikea frame is that it stands completely flat, so I didn't have to hang it - instead I just have it standing on a shelf and it won't topple.

A close up of the flourish: 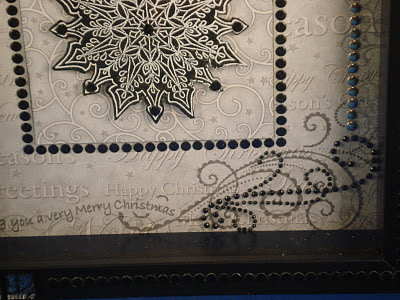 So, another Christmas picture..... I have put it up even though it is now after Christmas, so I can enjoy it until 12th Night LOL.

I photographed this using one of my Christmas presents - a photo studio booth thingie (can't remember the exact name now). Basically it has lights either side of nylon panels which diffuse the light shining on the object to be photographed. I think I need more practice at it, but the ones I have taken so far aren't too bad. 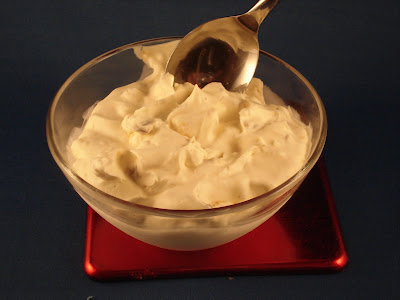 Well I don't know where on earth December disappeared to, but I shall start the New Year as I mean to go on - one of my resolutions is to blog more often :-)
Let's have a great 2012!

Here is a delicious and more importantly, simple, dessert recipe.

Whip cream (I use a handmixer on highest speed) until you can hold bowl upside down without it falling out. Fold in condensed milk with large metal spoon until combined - you can use the hand mixer on lowest speed when it is mostly folded in, to make sure it is fully mixed, but don't over beat or all that air you whipped into the cream will be lost and it will go runny again - though if this does happen, don't worry, you can pour it into the bowls instead of making a spooned pile! Stir in Crunchie bar bits.

Pile by the spoonful into small glass bowls or ramekins and freeze for a few hours until firm.

Serves approx 8, depending on size of bowl :-)