For the last couple of months, I had half-done several cards for this challenge, but not finished them.  So in July I have had an almighty catch up, resulting in four sets of five cards!!  The photo shows one from each set, with two white hexagons as they had different sentiments. 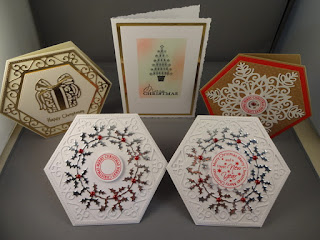 To make the hexagons, I used a 6" square blank and a Sizzix hexagon die, with the folded edge of the original blank just inside the cutting edge.  I also went a bit mirri-tastic!!  As always, it doesn't photograph well.....
The white hexagons have a holly wreath die from Tonic, cut in silver mirri, a hexagon frame (Card Making Magic) which is a two piece swirly bit and stitched outline.  The sentiment on the left is from an old set, I have no idea which brand and the right hand one is from Stamping all Day.  Both were stamped/heat embossed with Wow apple red powder.  Just a few 5mm red pearls for the wreath to finish it off.
The ivory hexagons have die-cut gold mirri - the same hex frame, a gift die from Tonic and the sentiment a tiny peel off.
The Scandi hexagons have a huge die-cut snowflake (Kaisercraft) and the same round sentiment as the white, but this time I punched out the centre to make a sentiment polo LOL.  I really like it and plan to make some more little polos in different colours :-)
Finally, the A6 card has a background done by inking through an aperture, over stamping with the tree and sentiment from SU.
Posted by Wendy at 16:34 1 comment: