This weekend Sy came down, to bring the new tote she had picked up for me - We R Memory Keepers rolling tote, she ordered three, for herself, Karen and me!
So we had a lovely craft day, I got eight cards made, would have been nine if my Herma dispenser hadn't broken mid-use :-(
For the thank you cards below, I used a new stamp, a new die and some new card blanks, so they definitely qualify for my Buy it - Try it this week :-) 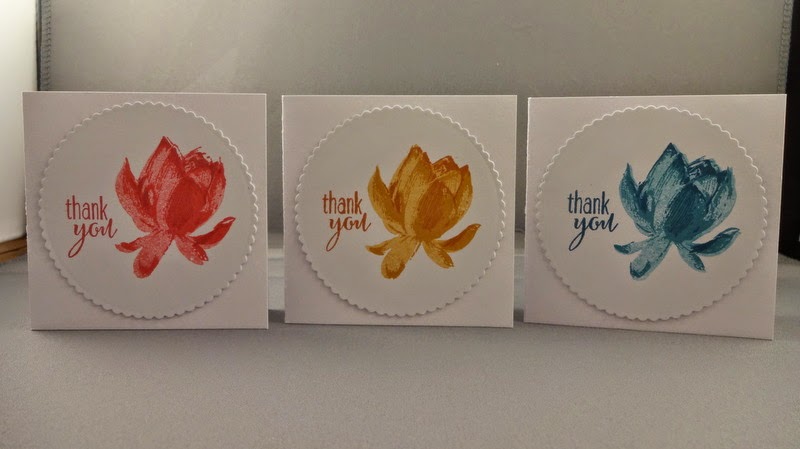 The stamp is from Stampin Up, a three stage stamping process to get the different layers and colours on the lotus blossom, the sentiment is from the same set.  I had been a bit hesitant about using it, as I didn't quite 'get' how it worked, but Sy has a great example here, so she talked me through it, it's not actually difficult once you try it LOL.  I used a Tonic Studios scalloped circle die, this is a great set, 14 dies I think, and they don't have too much of a border if you use the next size up for a mat.  Not that I could have fitted a mat on these tiny cards - they are 3" square, just right for little thank you cards.

Update on The Wedding Card - she loved it :-)

Email ThisBlogThis!Share to TwitterShare to FacebookShare to Pinterest
Labels: Buy it -Try it, die cutting, stamping, thank you card

One of my colleagues is getting married in a couple of weeks' time and so we had planned to go on a girlie night out beforehand.  Foolishly I said "Shall I make a card.....?" LOL.

The timing got a bit precarious as I ordered some 8" square card blanks, in plenty of time so I thought, then they took THREE WEEKS to arrive!! They came two days before our trip to Venice and I only had a couple of days after our return to get the card finished.  So I asked everyone to sign the card blank whilst I was away, before I started work on it.  This did have the advantage of their being able to write on the inside left side of the card, which wouldn't have been possible after I had made it "lumpy" LOL. 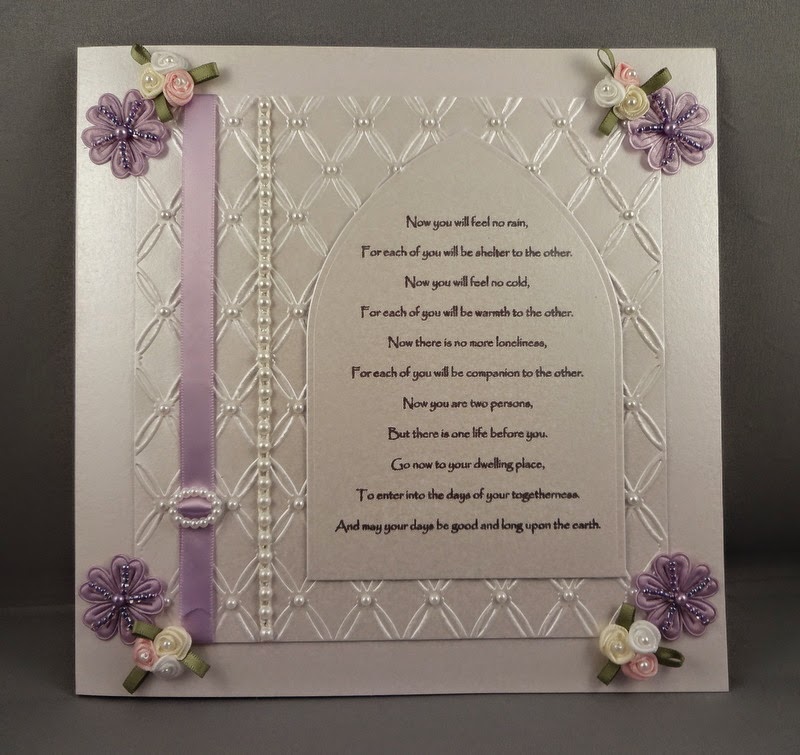 The whole card is made using Centura Pearl in Fresh White.  I embossed two pieces of card with an embossing folder from Couture Creations, called 'Tied Together', I think.  It's a 5 x 7 folder, so I had to make a square out of two pieces and join them .... the pearl strip covers the join :-)  I had bought the flowers from Meiflower and the Ribbon Box at the Make It Show, especially for this card.  The ribbon buckle was also from Meiflower.

I found the Apache Wedding Blessing online - though apparently it isn't actually Apache at all, but from a Hollywood movie (Broken Arrow)!  But it's a nice verse, I didn't want anything too sloppy :-)  I printed it out and die cut with an arch die from Go Kreate.  I also cut a smaller arch to place underneath so that it is slightly raised, but without lots of foam pads being visible.  Assembly was a bit tricky, as my normal Herma repo adhesive doesn't perform too well on this card.  So I had to use 'red' tape .... once it's down, it's down, no room for error - scary stuff!

After assembly, the last thing was to stick a pearl onto each intersection of the embossed mat.  I don't think I have missed one ........ fingers crossed!

The girlie night out is this evening, but sadly I can't go, so I will have to wait until Monday to hear if she likes it!

A combined Buy it - Try it and Out of the Drawer post :-)
BiTi - I used three new dies, the Boudoir Square and rococo heart from Tonic Studios and a tag from the Spellbinders Victorian tags set.  Oh, and some linen textured cardstock which I bought at the Make It show.
OotD - I used a Memory Box diamond background die and some old freebie magazine papers. 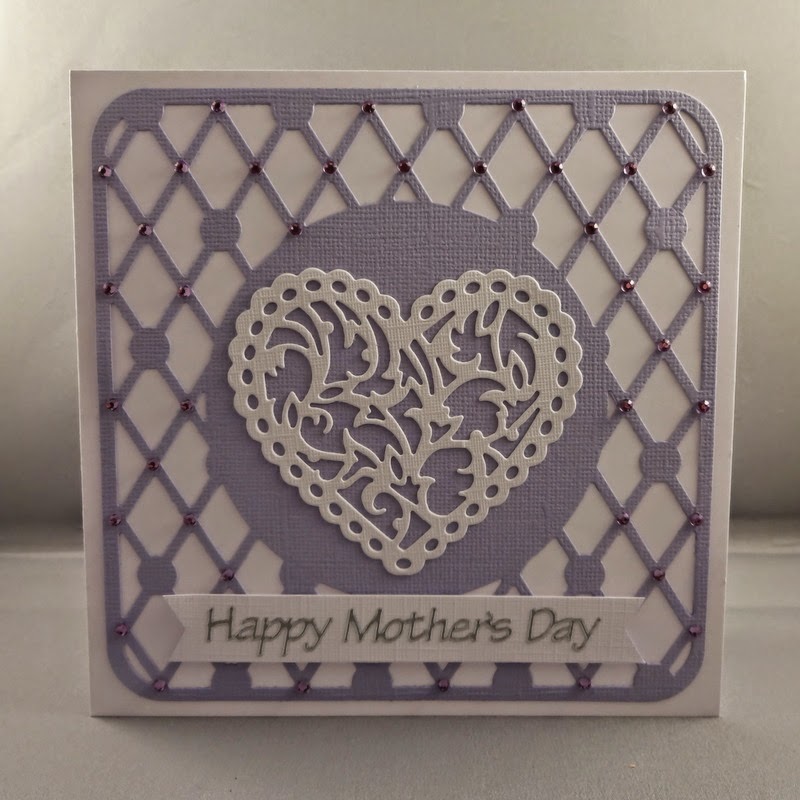 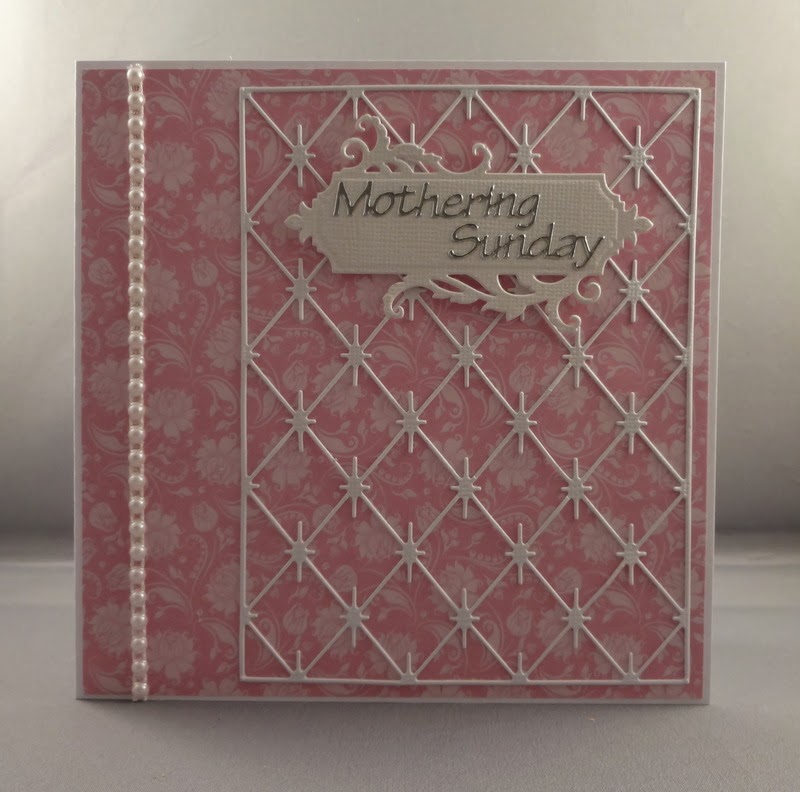 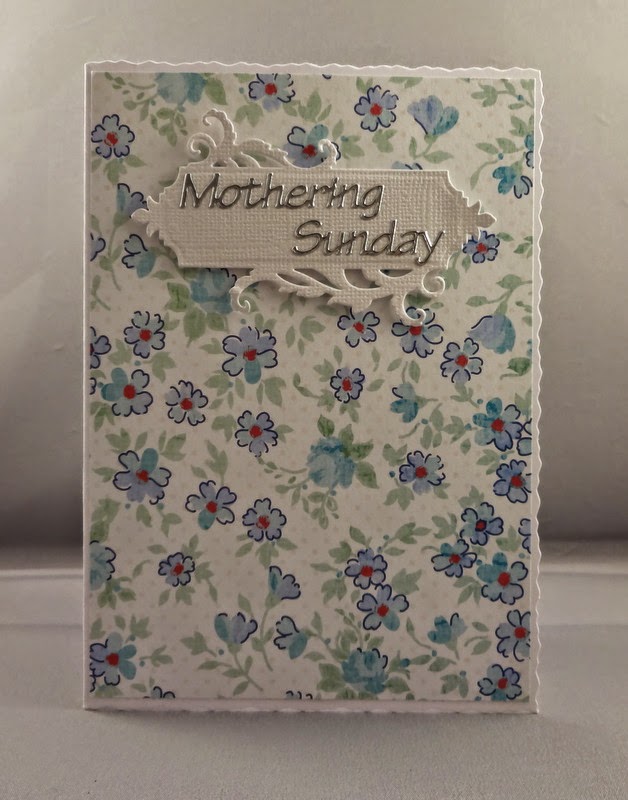 Quite simple cards, but I am pleased with them and I think the recipients will be too :-).
Posted by Wendy at 22:14 2 comments:

Email ThisBlogThis!Share to TwitterShare to FacebookShare to Pinterest
Labels: Buy it -Try it, card, die cutting, out of the drawer

Hmmm .... so much for a week of Buy it - Try it .... just didn't happen last week!  A combination of real life and a new DVD, season 6 of The Mentalist :-)
I have at least finished the UFO mentioned in the last post - the 'new' part of it being the crackle glaze!  It's a narrow chest of drawers, made of wood and bought originally from the Craft Barn, I think, it was several years ago. 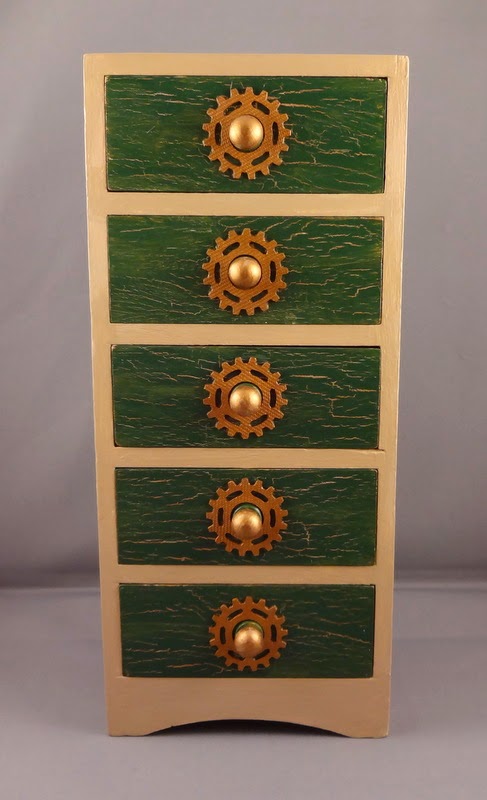 I had primed it a while ago and got DH to laser cut some cogs to go around the drawer knobs.  The main body was painted with a pale cream, the drawers and cogs were painted bronze.  I applied the crackle glaze to the drawers and when it was dry, applied some Paperartsy paint in Hyde Park over the top.  The bronze crackles come through like magic!  At that point, it became obvious that the cream was too light and bright against the drawers, so I re-painted the body with Paperartsy Irish Cream.

I then cut some Venetian paper for the top and sides - bought a few years ago on our first trip to Venice, I have been hoarding it!  But it's time to start using it as we are going back next week for our 30th wedding anniversary and DH will raise an eyebrow if I buy any more without using at least some :-) 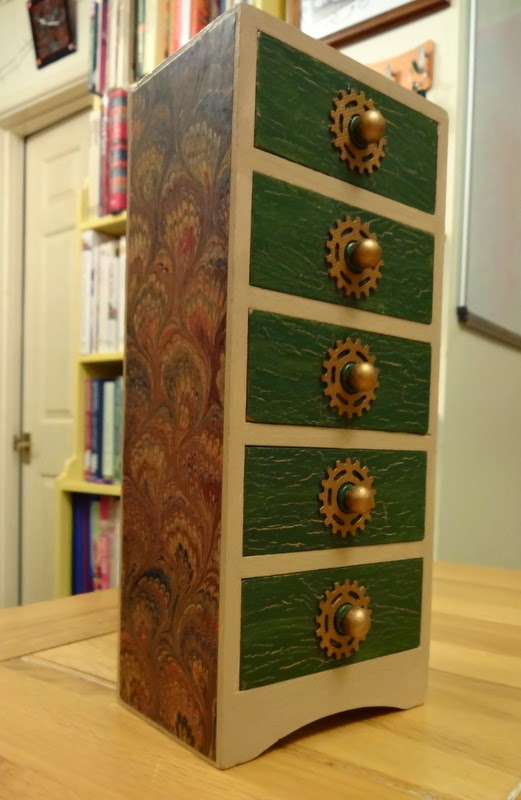 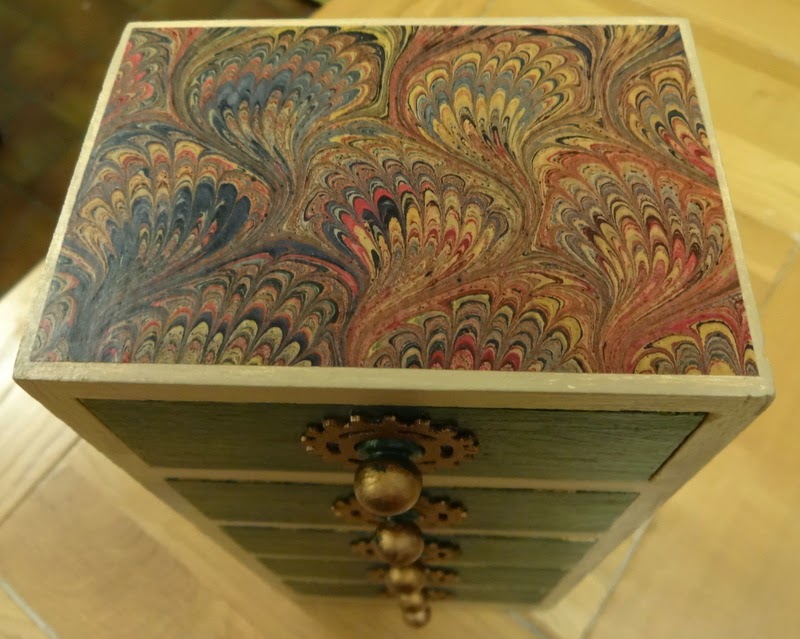 Here are the side and top views, I did hesitate about putting an extra decoration on top, but I am happy with it as it is.  Another UFO conquered!
Posted by Wendy at 07:41 4 comments:

Our trip to Farnborough deserves (needs!) a full week of BiTi.  The intention was to start on Saturday when we got back and continue on Sunday.
However .... I got waylaid by a UFO and spent most of my Sunday working on that, not using anything I had bought at all, though the crackle glaze was a recent re-stock! .... I'll post that during the week.
I did try test-cutting my new dies, a Tonic Studios frame, a TS heart and some Sue Wilson corners. 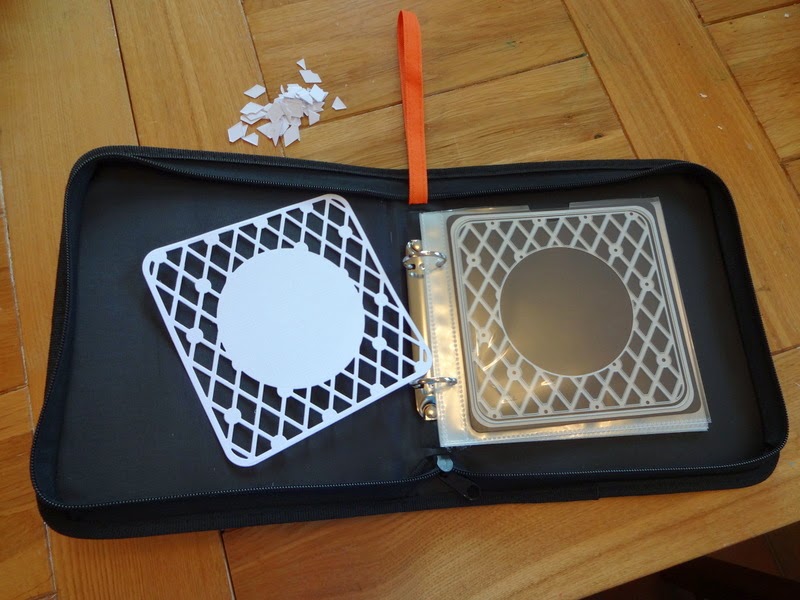 So here is the die-cut, the die and the new TS ring binder die storage wallet which I bought at the show - I am very pleased with it.  I think the frame is called Boudoir square, it cuts beautifully, first pass through.
Sy painted her new ribbon rack from MDF Man in a lovely dark greenish blue, you can see it here.  I must admit, I was after some items from them as well, but sadly they had no stock - although I was tempted by the spice rack they had, it was cash only and I had run out by that time!  Maybe next year :-)
Posted by Wendy at 21:29 2 comments: