I made this layout at the Littlegreen retreat, except for the title.... it's only been a month, so quite quick to finish, for me LOL.
We didn't manage to get many photos over Christmas, but I love this one of DH messing around with  Christmas antlers :-) 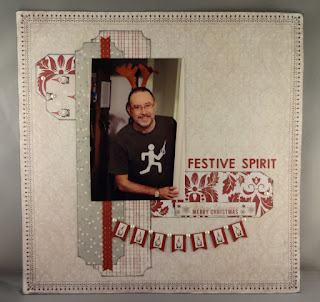 The papers are a mix, from a assortment pack of papers bought on Black Friday at a ridiculous price!  I think there is Maja Design, Teresa Collins and Bo Bunny, but I won't swear to it!
I  made the banner using SU banner punch and some pearls, the vertical panels have Woodware punched invert-rounded corners, the horizontal strips were created with the SU tag end punch, the vertical strip is an EK Success punch.
The title is done with the Memory Box Alphabet Soup die.

Last weekend, on my craft day with Sy, I was messing about with distress inks.  There had been a DI class at the Littlegreen retreat and I wanted to try out using the round blending foam tool rather than my usual ink duster brushes.  Well, I failed miserably, I am too heavy handed for the blending foam!  I made two backgrounds then reverted back to my brushes for the other two. 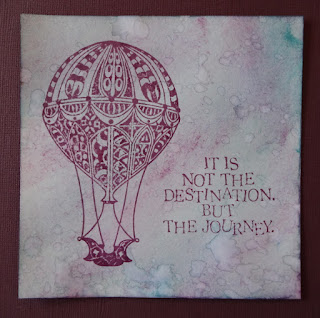 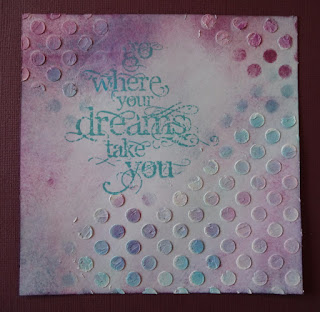 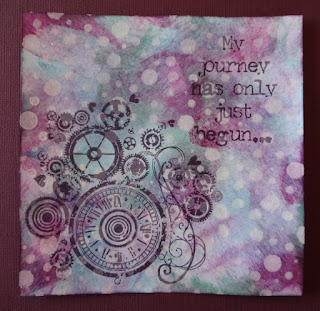 You may notice that there are only three..... the fourth one was going well until the final over-stamping, then it all went horribly wrong.  The DI colours I used were Seedless Preserves, Peacock feathers and Iced Spruce.
The balloon image is from Clarity Stamps, the steampunk swirly is from Stampendous.  Sentiments - well, I am not sure what the first one is, I have had it so many years!  The second one is from Visible Image and the third from Woodware.
I also played around with texture paste and gesso on the second and third pieces respectively.
They were supposed to go in some 6" box frames which I have, but it looked completely wrong having such a flat piece in a box frame and also I didn't have enough cardstock to make four mats .... so I bought three 5" black frames from Amazon and they are perfect.
Here they are all framed up:

I am so pleased with these.  They are to go on a narrow vertical wall space and I am now wondering whether five would look better than three..... LOL.

I finished off this layout at the Littlegreen retreat a couple of weekends ago.  All it needed was the small journalling banner at the top .... LOL. 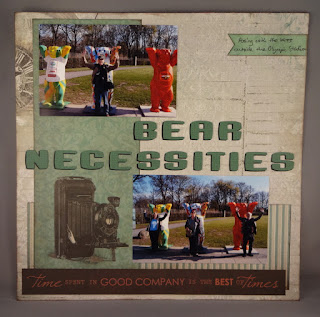 The photo was taken outside the Berlin Olympic stadium in April last year.  The papers are a mix from stash, I think there may be Prima and Kaisercraft amongst them!
The title was done on the Silhouette, in black and green and layered to give a shadow effect.  I actually had to cut it twice, the first time I cut each letter far too big to be able to fit such a long title on the page, so had to scale it down :-)
Posted by Wendy at 21:56 5 comments:

Krafty Karen is running this challenge again this year - make five (or however many you wish) Christmas cards a month.  The challenge goes live every 25th of the month and you have until the 24th of the following month in which to take part.
I made these at the Littlegreen retreat, weekend before last, but have only just photographed them!! 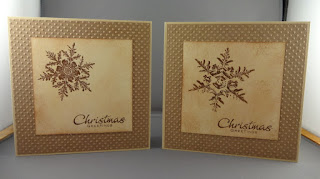 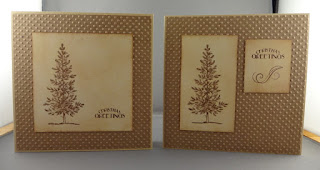 The topper is done using smooshed distress inks in Antique Linen, Tea Dye and Vintage Photo.  Then I over-stamped with Wendy Vechhi Potting Shed, the snowflakes are from Visible Image, the tree is from Stampin' Up, both sentiments are from Stamping All Day and the swirl is from Waltzing Mouse.  I matted the topper onto Bazzill dotted swiss cardstock and used a light brown card blank from Craft Creations, I think the colour is Sandstone.
Incidentally.... the tree cards were both supposed to be the same, as in the left hand design .... but I messed up the sentiment stamping on the second one, so had to change things a little .... LOL.  There aren't many mistakes in stamping, you can salvage almost anything :-)
Posted by Wendy at 07:21 2 comments: