The theme for this week's Less is More challenge is 'Masculine' and I thought I would have a go.
The main idea for this card is the inlay technique which Sy and I brainstormed between us last craft day.  She will have a video tutorial up soon, I will add the link when that happens.  We picked out a border die and thought we could cut it out in plain cardstock, then cut another one in patterned paper and keep all the pieces which would normally be waste.  Then combine the two! 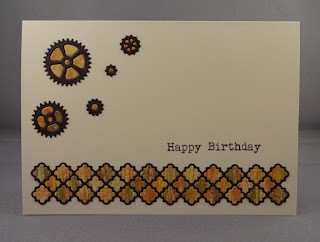 I didn't use patterned paper in the end, I inked up a sheet of cardstock by swiping inkpads across it, then die-cut from that.  Then I placed the border and the stamp, but thought it needed more..... so I applied the same technique to some die-cut gears .... very fiddly, but I think they look good!
Posted by Wendy at 07:00