Buy it, Try it: Less is More challenge - Autumn

Two blog challenges in two days - I don't know what's come over me :-)
The Less is More week 245 challenge theme is 'Autumn', so I decided to go for Autumn colours.  I actually ended up making two cards, because I re-read the rules after making the first one and realised that it is a one layer challenge this week .... I had done a matted and layered card!  That'll teach me to read things properly LOL, you'll be seeing that card in the next few days instead.
I christened some new stamps: SU Watercolour Wash and Flowering Flourish, also a script stamp from Darkroom Door.  There are two new inks making an appearance too, Wendy Vecchi Pale Ochre and Memento Potter's Clay. 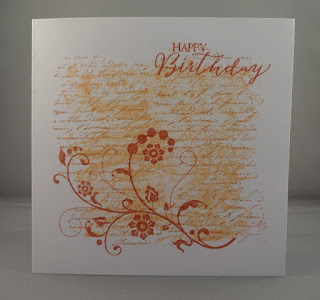 I partially inked up the Watercolour Wash (it is huge) and stamped it as a background in Pale Ochre.  Then I used Memento Peanut Brittle to stamp the script over the wash, four times as it is only small.  I do miss my Prima script stamp, it was a useful size and I have lost it, don't think you can get it any more :-(  The Flowering Flourish and the sentiment (from SU Butterfly Basics) were stamped in Potter's Clay.
I don't usually go for orange, but I really like the way this has turned out :-)
Posted by Wendy at 15:52

Email ThisBlogThis!Share to TwitterShare to FacebookShare to Pinterest
Labels: Blogtober 2015, Buy it -Try it, Less is more, stamping