A few months ago, I started stitching for 10 or 15 minutes every morning, sitting in my car before work.  I have already blogged the Sun Dragon made in this way here, but there was a piece before that, which turned out to be a bit of a disappointment :-( 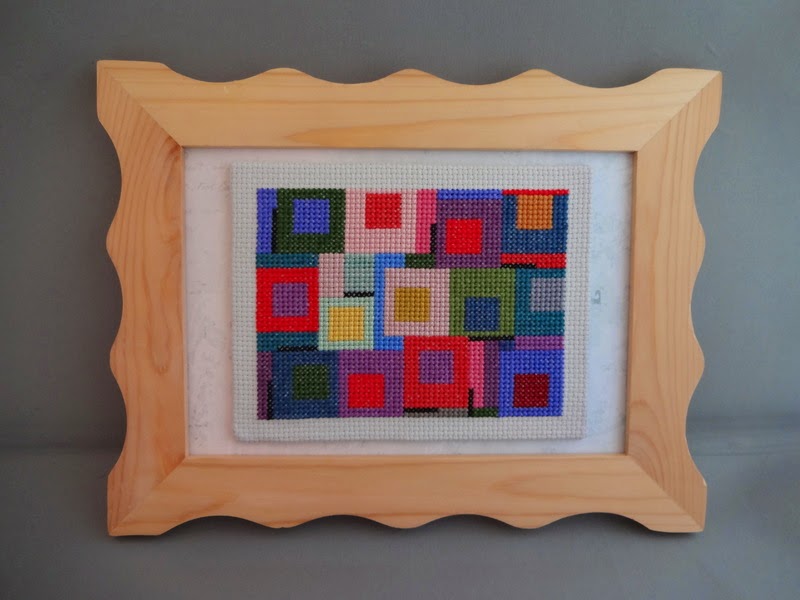 It's quite simple, lots of squares in various colours - it was a chart from a very old issue of Cross Stitcher magazine, I think.  After I had finished it, I made the mistake of not taking it off the frame immediately and it was left in its carry bag for about three months.  When I came to take it off and frame it, I discovered two things.  One :- the frame had marked the fabric, quite close to the stitching.  Two :- the dimensions of the design would not fit into any standard sized frame.  You would think I could have noticed that whilst stitching, but there you go :-)

So my options were limited - I couldn't cut the whole piece of fabric to a standard size because of the frame marks on the fabric and I couldn't fit just the stitching with a narrow fabric border into a smaller frame because it wasn't a standard size.  I ended up cutting a piece of self adhesive mountboard to size, attached the stitching to it, then attached the whole thing onto another piece of standard frame sized mountboard covered with toning paper.  Then I put it into a frame so that it was protected under glass.

And ... I don't like it.  The design of squares is a nice idea, but I don't like the colours, I think the overall impression of them is too dark, even with some light colours in there - which I did notice whilst I was stitching but only towards the end when it all came together and I persuaded myself that it would be fine, really :-)  Then there is the size issue ......

I think that what I will do at some point, is re-chart the design, expanding it into a standard size and using different colours.  It's not going to be soon, though ......

In the meantime, Sy likes it, so she received an unexpected gift LOL.