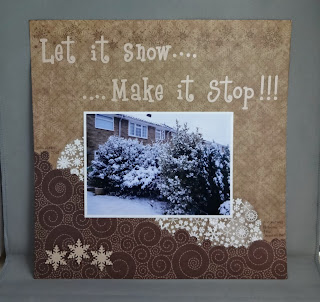 The current Craft Stamper Challenge is to use acetate in some way on a project.  Now this is well out of my comfort zone, in fact I think the only thing I have ever used acetate for is as a clear front for a shadow box :-)
I decided to stamp and emboss, so after getting some heat-embossable acetate, I used a snowflake circle stamp from Hero Arts.  The original intention was to use the circles on a card in some way, but once I had done a few, I wasn't happy with that idea, so pushed them to one side of the desk for a while, to wait for inspiration to strike!
Later ..... a couple of days later! ..... I looked at them and thought how they looked like a little snowdrift, and remembered that I had a snowy photograph to scrap!
The papers are a mix of old and new, the lower swirly one was bought on a trip to America, so either in 2004 or 2007!  Curiously, though, they are both from Hot off the Press.  I stuck the background snowflake paper to some white card (HOTP are quite thin papers) and stamped the Hero Arts snowflake border along the top.  Then I fussy-cut around the swirls on the other paper, shuffled the acetate circles and photo around until I was happy with the positioning, then stuck everything down.
The title is robo-cut (font: Boyz R Gross) and the snowflakes are done with a Martha Stewart punch.

A close up of the acetate: 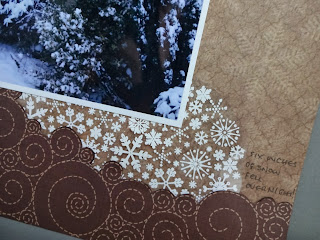 I rather enjoyed this, definitely need to experiment some more :-)