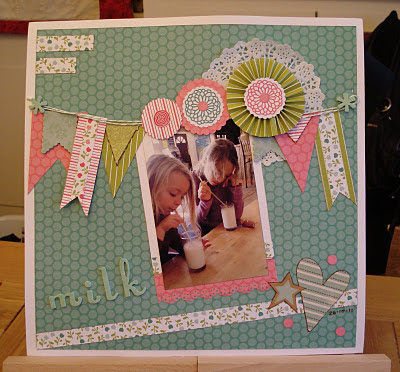 Last weekend, I went to the Sarah's Cards retreat in Warrington. I was a bit nervous, both because of the long drive (five hours) and the fact that I didn't know anyone. No need to have worried though, everyone was very friendly and helpful! There were 6 classes all together - I didn't do the two Sunday ones as I wanted to leave for the five hour drive back straight after lunch, rather than at 4:30 after the last class, and the morning class would have taken too a long time to dry before being able to attempt to pack it up for transporting! So I got both the class kits and instructions to take home with me to do later.

I now can't for the life of me remember which class was whose, so a big thank you to all the teachers! I didn't produce an exact replica of any of the classes, but started off following the instructions, than wandering off on my own path LOL.

This class LO had us making flags and rosettes - there were two rosettes to make, but the process really made my hand hurt, so I just did the one....... it's not as perfect as it could have been, but it doesn't look too bad on the page.

Little Girl's mum had sent me a lot of pictures (after a gentle reminder!) and I now have enough material for about 24 pages. This one is LG and Big Sister enjoying a glass of milk.

Over the weekend I completed 9 LOs (minus journalling) and partially did two more, which were the class ones for which I didn't have any photos which matched the kits with me. I'm very pleased with my total!

Thank you to Sarah, Lianne and the team for a great weekend :-)
Posted by Wendy at 21:19