Our 32nd wedding anniversary was last Thursday.  We went off to Oxford for a couple of days to celebrate, had a nice time wandering around Blenheim Palace and its gardens.  We had meant to visit a couple of museums on the following day, but I had wrecked my feet going round the gardens, so we'll have to leave that for another time.  The hotel was nice, but the room didn't have glasses in, just those plastic tumblers which would tip over if you poured something from a bottle into them... so we drank our Prosecco by the mug instead!!  And very nice it was too :-)
This is the anniversary card I made for DH. 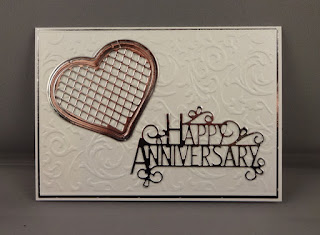 As usual, mirri and photography are not the best of friends.... It is very shiny in real life!!  I embossed some Bazzill Diamond Bling cardstock for the background and matted it onto silver mirri.  Then I die-cut the heart (Robert Addams) and sentiment (Tonic) from the same mirri.
Simple but effective, as they say :-)
Posted by Wendy at 23:02