I bought two Sheena Douglas dies earlier in the month and thought the clock would be perfect for a crafty friend's birthday card.  Yes it's the same card, photos taken in two different lights!! 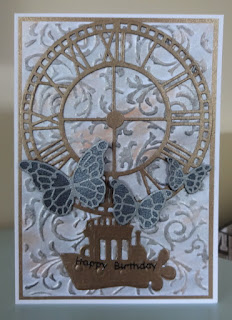 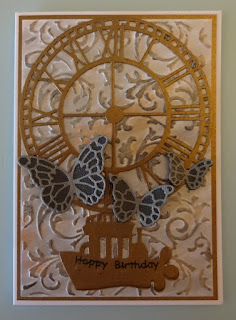 The background is embossed in a swirly folder, then coloured with Distress stains (another BiTi) in black, pewter and bronze.
I attached the die-cut, but it needed something more  ....... the die hadn't quite cleanly cut in one place and I decided to put a butterfly over it - in fact this card was going to be called Butterfly at 7 o'clock LOL.  But it looked a bit lonely, so I added two more!!  The die set is from Memory Box.
Originally I had planned to put a sentiment banner under the clock, but I had also tried out the SD balloon die when cutting the clock and I though the 'undercarriage' part would go very well under the clock!
So this one evolved a bit in the making, but I am very pleased with it :-)
Posted by Wendy at 06:00