I managed to get several layouts done at the ATDML retreat, end of October / beginning of November.  It was the most scrapping I have done since ...... well, since the previous retreat in April!
This one uses a sketch from the Sketchy Scrappers group, when the sketch was first posted back in August, I really didn't like it and thought it wasn't for me - but it turned out I had the perfect sequence of photos for it :-) 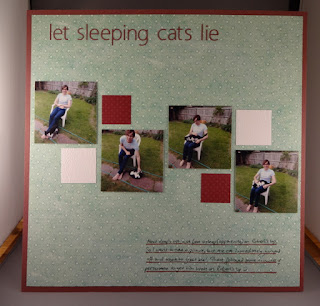 It tells the story of how I looked out of the kitchen window and saw next door's cat asleep on DS1's lap in the garden, so I rushed to take a picture ...... whereupon the cat leapt off his lap and came to greet me!  We had several minutes of persuasion before getting the cat back on the lap for the photo :-)
The background paper is from stash, it may be My Minds Eye?  The squares are punched out of Bazzill dotted swiss and a white woodgrain cardstock.  The title is die-cut with a Memory Box alpha set and the journalling is written on stamped lines (Stampin Up).
It's a simple page, but I really like it :-)
Posted by Wendy at 22:10