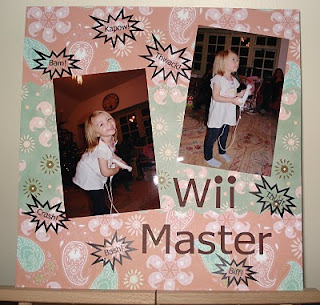 Little Girl playing on the Wii :-) Like yesterday's post, this LO was supposed to be a very quick and easy, deadline-friendly page. I was just going to put the two pictures on the pink paper with the title underneath. But when I laid them out, it just didn't look enough so I made a middle strip and then out of the blue came the idea for the cartoon words. It's still quite a simple page, but does look much better than the original plan.

The papers are very old - I have no idea what they are I'm afraid! I punched the edges of the centre strip for a bit of interest. The title was cut on the robo and I made the cartoon words by using the autodraw shapes and text box facilities in Word - then I printed out onto Safmat and cut them out.... quite fiddly and took longer than I expected!

The grand handover was last night - we went over for a meal and LG's mum was so busy looking at the album that she let the pasta boil dry! I think that means she likes it :-)