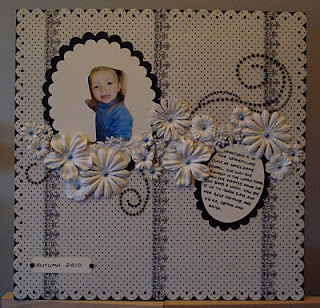 Have you ever seen a school photo like this? Little Girl's mum gave me this cut out version of her, printed out onto plain copy paper...... So we scanned it and I printed it out in various sizes.

I wavered between a Warhol transformation of the pic and a vintage cameo look, but with time being of the essence, went with the cameo. The paper is a Creative Imaginations die cut mounted onto black cardstock and I bought the lace and flowers at the stitching show in Brighton which I went to last weekend. I also bought some Go Kreate large scalloped oval dies, which I used for the larger frame, the smaller is done with Nesties.

The lace is laid across the cut out pic to disguise the straight line at the base of it - couldn't do much about the top of her head being missing though! Then I added the flowers and crystal swirls, putting some blue pearls in the centres to echo her top and the blue lines in the paper. The tag is done with a Nestie die and attached with black brads.

I think it has come out OK, I really like the composition and the colour combination ...... but what an awful photo :-( Hopefully I will get a better one next year!

Email ThisBlogThis!Share to TwitterShare to FacebookShare to Pinterest
Labels: layout