I got seven layouts completed and a few more partially done at the ADTML retreat.  I hadn't actually scrapped since the previous retreat last April, but it was like meeting up with an old friend, I just took up where we left off!
Here are two: 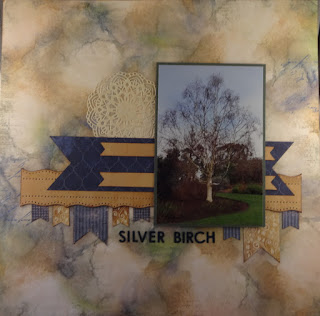 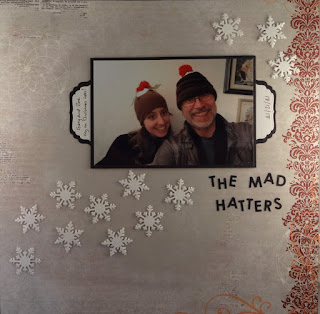 The photos have come out a little dark!  Silver Birch has a beautiful background paper which didn't really need much adding to it.  I used this sketch from Pinterest, the banners and long strip are punched, the doily is die-cut, as is the title.  It is also straight in real life, not as wonky as it looks, I swear!
The Mad Hatters also lets the background paper do most of the work.  I punched out two different Martha Stewart snowflakes, several times, to make a flurry.  The journalling and date tags at the side of the photo were supposed to be done with a label punch, halved - until I discovered I hadn't packed it!  But in my die folder I had the nestabilities labels four set and it was perfect.  The title is die-cut.
Posted by Wendy at 06:30