I didn't get these finished in time to photograph and post yesterday - but I am joining in Sy's Mandala Monday, albeit belatedly :-)
I was originally just going to mount these mandalas - made last year to test the stamp set but never used further - onto a square card blank, but somehow it didn't look right.  So I went in a completely different direction and now I am happy :-) 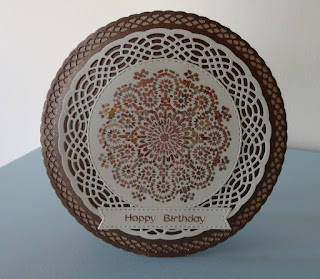 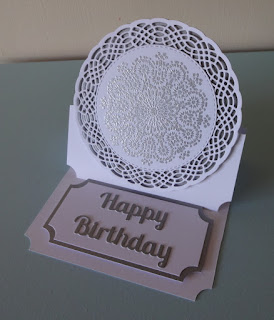 The copper mandala is done with gilding flakes (very difficult to photograph!) and the silver is heat embossed using a Stampin Up powder, which is quite a matt silver.
I used the Celtic Dreams layering die set from Tonic Studios to make the mats and also to cut the circular card base.  This is made with two separate circles, the back circle is horizontally scored about an inch down from the top edge, the area above the score line is then attached to the card front with red tape.  Fold along the score line and the card stands up!  The sentiment tag is an MFT stitched banner die.
For the easel card, I scored and folded the front of a card blank to form the easel part, then hand-cut and invert-corner rounded the sentiment stopper panel.  The sentiment itself is die-cut (Robert Addams).
It was craft weekend plus I have a couple of days off work, so managed to make 14 cards over the Sat-Sun-Mon, I am well chuffed :-)
Posted by Wendy at 15:33