I have fallen behind with BtCR this year, I managed January, but skipped out completely for February and March :-(  So here are twelve cards, for April!
These were started at the retreat, I had taken four sheets of 8 x 8" freebie magazine Christmas paper with me, to see how many cards I could get out of them.  Then I finished them off at home, stamping and embossing various images.
So, in the order in which I cut down the sheets ......
The completely covered A6 cards, four of these, two each of the designs shown here: 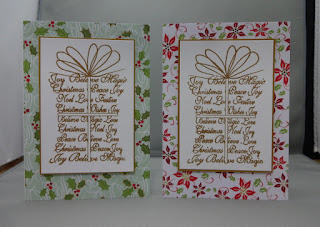 The A6 with panel: 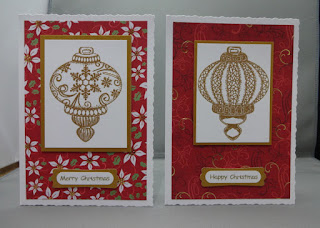 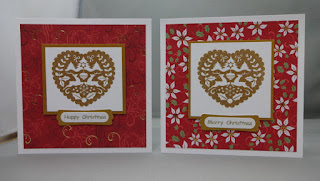 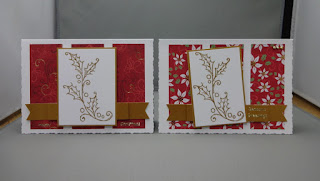 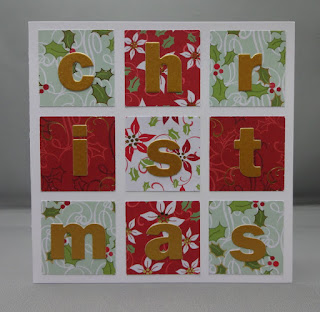 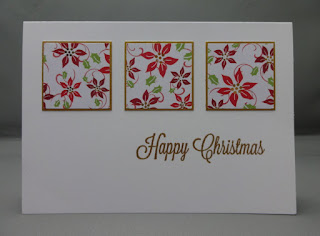 Stamps, in order, are from Stamps by Chloe, Creative Expressions, freebie magazine, Woodware and the final stamped/embossed sentiment is from one of the CE bauble sets.
That comes to twelve cards from four sheets.... if I had planned ahead instead of making it up as I went along, I might have been able to get one or two more from the scraps!  I think my least favourite are the triple panel cards, the banner design didn't quite come out as I had imagined it..... but it's an idea to revisit later :-)  My favourites are the triple square and the nine patch - I have done both of these before and have now discovered that this particular alpha die (Dienamics) fits the squares perfectly, so there'll be some more of those to be done!  I like the CAS style of the triple square, though it is intimidating to stamp directly on the card, after the squares are affixed.... :-)