Nat over at Kool Kitty Musings is hosting a 2017 colour challenge, based on Pantone seasonal colours.  January's colours are two shades of blue, Island Paradise which is an aqua-ish light blue and Niagara which is a dusty darker blue. 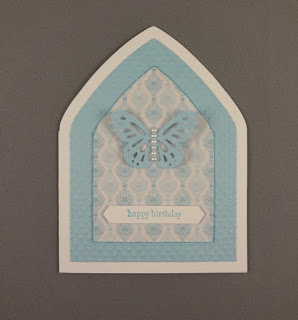 I plan to do one in each colourway! I found some Bazzill in a colour called 'Seawater' which was a good approximation of the lighter shade.  To make the shaped card, I used a card creator die from Diesire ('Louise') and cut this blank from an existing rectangular blank, then used it to cut the mats.  It has a non-cutting edge for the fold of the card, so if using for mats you need to do that edge with a trimmer :-)
I embossed the Bazzill with a Swiss dot embossing folder. The paper is a magazine freebie, a bit thin to go straight onto such a textured background, so I made a mat of white card in the same size to stiffen it up a bit :-)  Then I punched a butterfly (Martha Stewart) and added pearls for the body.  The sentiment and punched strip are both from Stampin' Up.
Very unusually for me, I used this new die on the day it arrived in the post!!  I like the effect it gives, though it makes the A6 card blank a little short for the envelope - I 'm sure no one will notice though :-)
Posted by Wendy at 20:22