I have had this stamp (Stamps by Chloe) for a while and decided to stamp/emboss it in silver, several times, to try out different colourways.

I die-cut the coloured images into circles and cut out an inner circle.  Having matched each colourway to cardstock, I die-cut a stitched circle mat (Crealies) and another circle just slightly larger than the aperture from a die-cut trellis panel (Tonic Studios), for the inner circle aperture.  I also cut butterflies (Frantic Stamper) and a swallowtail pennant (Spellbinders), plus some plain white sentiment banners.

I had found these shaped card blanks in my stash and decided to use them up, but I like the way a circular topper looks on them, so I may have to buy some more! 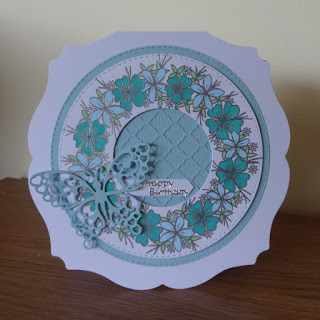 Contrast of blue and yellow: 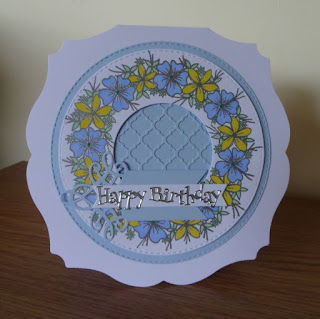 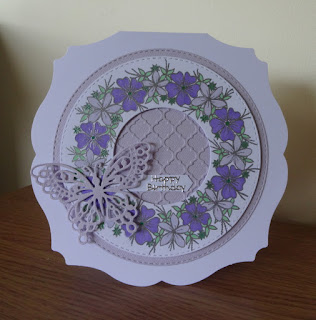 I am definitely going to do some more of these, I think I will make the sentiment banners larger next time and also it would probably be easier to have an embossed central circle, rather than trying to stick down a fiddly die-cut LOL.