A few weeks ago, I decided to try to make three different cards with the same three DI colours.  Did I write those colours down?  Noooooo!  Can I remember them now, having been both poorly and suffering from an acute attack of Real Life in the meantime?  Noooooo!  I can tell you that there is a red, an orange and a yellow and that I am fairly sure the yellow was Fossilised Amber.  But I'm afraid that's it...... :-(

For the first card, I made a stencil using a scalloped circle punch and blended the three colours through the aperture, then over-stamped in black.  One of the mini butterflies is there to cover up the accidental black smudge, the rest are to balance it LOL. 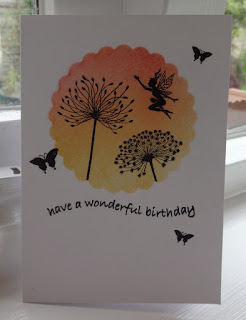 For the second card, I applied the three colours randomly over a stencil.  This made such a nice background, I didn't want to cover it up too much (always my problem with backgrounds....), so I die cut the sentiment and butterfly, which is only stuck down along the body so the wings are free and finished off with pearls. 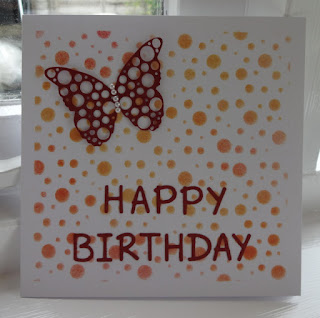 For the third card, I embossed some white cardstock in the Bigshot and brushed the three colours over it.  Then I stamped the flower in a mixture of the colours and softly blended over with the yellow (Fossilised Amber!!!).  One flower is stuck flat to the card and the second is raised on foam pads.  The banner sentiment is coloured to match. 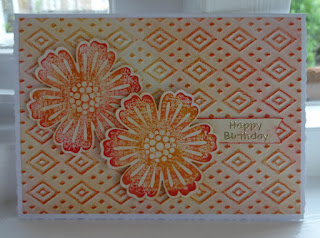 ﻿
Whilst typing, my brain is whispering that the red and orange might be Fired Brick and either Spiced Marmalade or Dried Marigold.  But don't hold me to it :-)﻿
Posted by Wendy at 21:10