Can we build it? 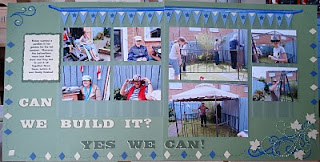 My DH went up to visit his family and spent most of the weekend struggling to put up a gazebo - the instructions were less than adequate and they had to take apart and rebuild three times!

The green stripey paper is from stash, and shows up much better in real life than in this photo, just couldn't seem to take a decent pic. I stamped and embossed some flourishes in the corners and doodled some faux stitching between them to form a frame. Then I added some crystal swirls and punched out some leaves to finish off the corner.

The bunting was cut on the robo and attached to a thin strip of cardstock, with some ribbon at the top ...... this took ages as the ribbon refused to lie flat for sticking and kept curling up! I had originally planned to leave it at that, but it looked a little plain, so I punched out diamonds and stars, cut the diamonds in half to make triangles and stuck all those down. Then I decided the doodled frame needed a little more emphasis so I punched out more diamonds in pale yellowy green and dark green, stuck all those on then realised that the dark blue would look much better than dark green - so punched out yet more diamonds and put them over the green ones.....

The title is robo-cut, in both greens, then layered one on top of the other to give a shadowed effect. Journalling is on safmat, stuck to the pale green and die cut with a deckled edge Nestie.

I always find it difficult to scrap events at which I wasn't present, but I am quite pleased with the way this has turned out!